A new front in the anti-vaccine fight emerges in California 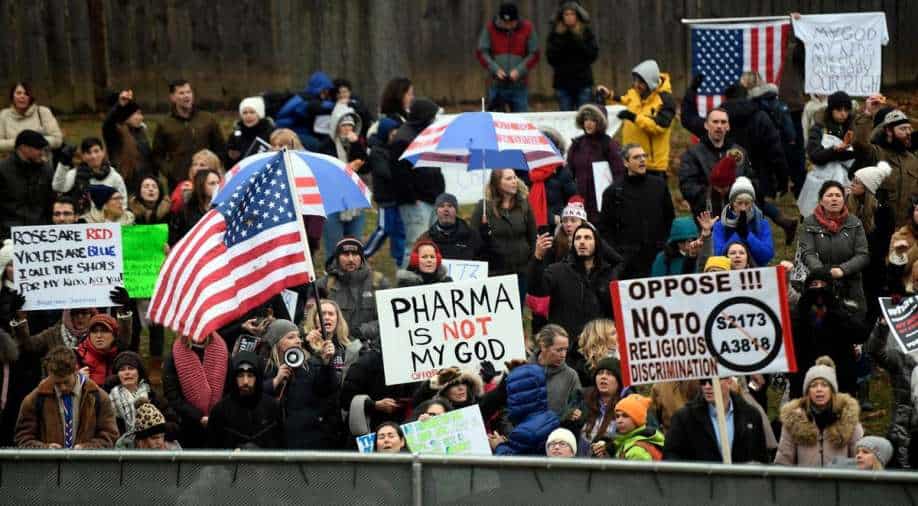 California, which has averaged 500 daily deaths tied to the virus over the past week, will soon become the state with the largest number of coronavirus deaths, surpassing New York.

LOS ANGELES — An out-of-work stand-up comic originally from New Jersey. An actor and conservative podcast host dressed in a white lab coat. A gadfly who has run several unsuccessful campaigns for Congress in Los Angeles. And at least a few who had been in Washington the day of the Capitol riot.

They were among the motley crew of so-called anti-vaxxers who recently converged on the entrance of the mass vaccination site at Dodger Stadium to protest distribution of a coronavirus vaccine.

The loosely formed coalition represents a new faction in California’s long-established anti-vaccine movement. And the protest was the latest sign that Californians have become the unlikely standard-bearers for aggressive criticism of the vaccines even as virus cases continue to spread in the state.

California, which has averaged 500 daily deaths tied to the virus over the past week, will soon become the state with the largest number of coronavirus deaths, surpassing New York.

For months, far-right activists across the country have been rallying against mask-wearing rules, business lockdowns, curfews and local public health officials, casting the government’s response to the virus as an intrusion on individual liberties. But as masks and lockdowns become an increasingly routine part of American life, some protesters have shifted the focus of their anti-government anger to the COVID-19 vaccines.

Last week at Dodger Stadium, the same small but vocal band of demonstrators who previously staged anti-mask and anti-lockdown protests in the Los Angeles area disrupted a mass vaccination site that gives an average of 6,120 shots daily. About 50 protesters — some carrying signs reading “Don’t be a lab rat!” and “COVID = Scam” — marched to the entrance and caused the Los Angeles Fire Department to shut down the city-run site for about an hour.

The disruption illustrates the increasingly confrontational bent of some of the state’s vaccine opponents, who have long claimed that mandatory school vaccine laws represent governmental overreach. Many were already skeptical about vaccine science, having read online disinformation sites that claimed early childhood vaccines caused autism, an allegation long refuted.

In California, the anti-vaccine movement has been popular for decades among Hollywood celebrities and wealthy parents, gaining momentum as state lawmakers passed one of the nation’s toughest mandatory vaccination laws for children in 2015. Previously, parents had opted out of vaccinations by seeking exemptions claiming that vaccines conflicted with their personal beliefs, but the law eliminated that option. The popularity of those exemptions led to immunization rates that dropped to 80% or lower at public and private schools and preschools in Beverly Hills, Santa Monica and other affluent Los Angeles area communities.

“Anti-vaccine attitudes are as old as vaccines themselves,” said Richard Carpiano, who is a professor of public policy and sociology at the University of California, Riverside, and who studies the anti-vaccine movement. “The other thing that gets tied into this is the wellness movement, this idea that natural is better. There’s a broader kind of mistrust of Big Pharma, and about medical care and medical professions. There is this real market for discontent that these groups can really kind of seize upon.”

In the COVID-19 era in California, vaccine opponents have found themselves increasingly in alignment with pro-Trump, working-class people sometimes eager to embrace extreme tactics to express their beliefs.

Anti-vaccine activists in the state have long been aggressive at times. But in the past two years, and in the months of the coronavirus pandemic, there has been an uptick in confrontational and threatening tactics.

They assaulted a lawmaker in Sacramento and threw menstrual blood onto legislators in the Senate chambers at the state Capitol in 2019, and last spring they helped pressure the chief health officer in Orange County to resign by publicly revealing the official’s home address. Last month, two weeks before the stadium vaccination protest, a group of women threatened lawmakers at a budget hearing at the Capitol, telling senators that they were “not taking your shot” and that they “didn’t buy guns for nothing.”

“I think the thing that’s most concerning is that they’re escalating,” said state Sen. Richard Pan, a pediatrician and Democrat who wrote vaccination legislation. Pan was struck in the back in 2019 by an anti-vaccine activist and was the likely target of the blood-throwing incident in the Senate chambers that year.

Protesters who attended and helped organize the Dodger Stadium demonstration said they did not attempt to enter the site and did not block the entrance. They blamed firefighters for overreacting to their presence and shutting the gates and said their goal was to educate those waiting for vaccinations but not prevent them from driving inside to get their shots.

One of the protesters, a 48-year-old actor whose first name is Nick and who asked that his last name not be published because of death threats the group had received, said he did not believe that any of the protesters were part of previously established anti-vaccine groups in the state. “This has all stemmed as a result of this whole COVID-19 crisis,” he said. “It started with the mask-wearing and evolved to now being concerned over the vaccine. It’s all about civil liberties.”

The lead organizer, Jason Lefkowitz, 42, a stand-up comic and server at a Beverly Hills restaurant, said the catalyst for the stadium protest was the death of Hank Aaron, the baseball legend who died at the age of 86 on Jan. 22.

Aaron was vaccinated for the coronavirus in Atlanta on Jan. 5, and anti-vaccine activists, including Robert F. Kennedy Jr., have seized on his death to draw a link. The Fulton County medical examiner has said there was no evidence that he had an allergic or anaphylactic reaction to the vaccine.

“I’m not a violent person,” Lefkowitz said. “Nobody in my group is violent or physical or anything, but there’s a lot of people that don’t want to take this vaccine or be forced into it.”

No one was arrested, but city officials, including the police chief, were disturbed by the symbolism and the global headlines — that a small group of vaccine opponents had temporarily shut down one of the country’s largest vaccination sites and was walking and chanting mask-free among older residents waiting in their cars for their vaccine appointments.

“The optics of it is that it appeared that the protesters were able to symbolically interfere with that line, and I think that we have a greater public responsibility to ensure that that symbolism is not repeated,” Chief Michel Moore told the Los Angeles Police Commission at a virtual meeting.

Protesters were planning to return to Dodger Stadium and were more energized by the attention than discouraged by the social media criticism. Lefkowitz said that after the Fire Department shut the gates, he immediately took it as a positive sign for his group.

“They’re indirectly helping us, because now I’m like, ‘Oh, this is going to make the news,’” Lefkowitz said.

The ease with which many of the protesters have slipped from anti-mask to anti-vaccine ideology was on display in one Facebook livestream.

A protester at the site, Omar Navarro, a frequent Republican challenger to Rep. Maxine Waters, D-Calif., told his Facebook viewers that he was “100% certain” that voter fraud led to President Joe Biden’s victory; touted the effort to recall the Democratic governor of California, Gavin Newsom; and called Democrats “the real virus.”

“They want to deceive us,” Navarro said in the video. “They want to control us. They want to put this muzzle on our face, this mask, which I don’t use.”

One of the most prominent anti-vaccine activists in Southern California, Leigh Dundas, a lawyer, spoke at a rally in Washington the day before the Capitol riot and posted videos on social media as she stood outside the building Jan. 6, shouting, “This is 1776 all over again!”

In May, Dundas led a push to force out Orange County’s chief health officer, Dr. Nichole Quick, over her mask order, which was unpopular in the historically conservative county. Quick received death threats and was given a security detail. During a Board of Supervisors meeting, Dundas ridiculed Quick’s credentials, announced her home address and said she was going to have people “do calisthenics in masks on her front doorstep, and when people start dropping like flies, and they will, I am going to ask every single first responder in a 30-mile radius to roll lights and sirens to her front door.”

Kenneth Austin Bennett, the activist who attacked Pan, the state senator, was charged with misdemeanor battery and was scheduled to be rearraigned in a few weeks. Rebecca Dalelio, who was arrested after throwing blood from the Senate gallery, was charged with felony assault on a public official and felony vandalism and has a preliminary hearing this month. A spokesperson for state Sen. Toni Atkins, the Senate president pro tempore, said a report was filed with law enforcement after the women made the threatening gun-related remarks in January.

Pan said the lack of arrests at the Dodger Stadium protest suggested that anti-vaccine extremists would feel emboldened.