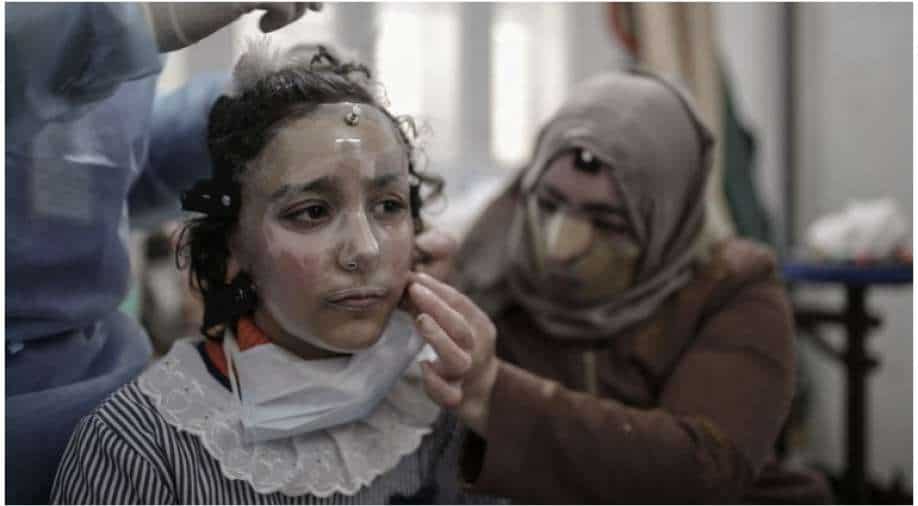 Eight-year-old Maram was severely burned a year ago in the Palestinian refugee camp of Nuseirat, in the central Gaza Strip

Maram al-Amawi, an 8-year-old girl in Gaza has been given a 3D-printed face mask in order to help her recovery from severe burns she received in a fire about a year ago. However, for the treatment to work, she has to wear it eight hours a day.

Eight-year-old Maram was severely burned a year ago in the Palestinian refugee camp of Nuseirat, in the central Gaza Strip.

The inferno, which local authorities said was caused by a gas leak, left 25 dead and dozens injured, and ravaged several shops.

Today, she and her mother, who was also seriously injured on the face and hands, wear transparent plastic masks developed by medical charity Doctors Without Borders (MSF).

The mask puts pressure on the face and speeds up the healing process. Doctors Without Borders (MSF) provided the mask.

To make this mask, the patient's face is copied using 3D scanner. This later allows printing of a customised plastic masks

The fitted mask, with adjustable straps to hold onto the face, has to be worn for between six months and a year, depending on the severity of the lesions.

Even though her mask is transparent and fits perfectly with the contours of her soft face, Maram is afraid of being pointed at in the playground.

"The mask has made my burns better, but I'm afraid people will laugh at me if I wear it outside the house," the girl shyly confesses, dressed in the black-and-white striped lace uniform of her school, which is run by the UN agency for Palestinian refugees.

"I put it on as soon as I get home from classes."

In fact, she wears it eight hours a day.

As for her mother Izdihar al-Amawi, 31, she keeps her mask on for 16 hours, only removing it during the day to eat.

At night, she wears another mask, and she also has special gloves for burns on her hands.

"Our wounds have improved thanks to the mask," says Izdihar, who now manages to go about household chores like before the accident.

"We were waiting for the taxi after shopping and we suddenly heard a big explosion, then saw fire everywhere," she recalls.

Accepting their disfigured complexions was not easy.

"My family refused to look at my face after the accident," says Izdihar.

"I only saw my face 50 days after the operation, in the elevator mirror while going to get my mask at the clinic."

The mother of four hopes the scars will disappear "in two or three years, as the doctors told us."