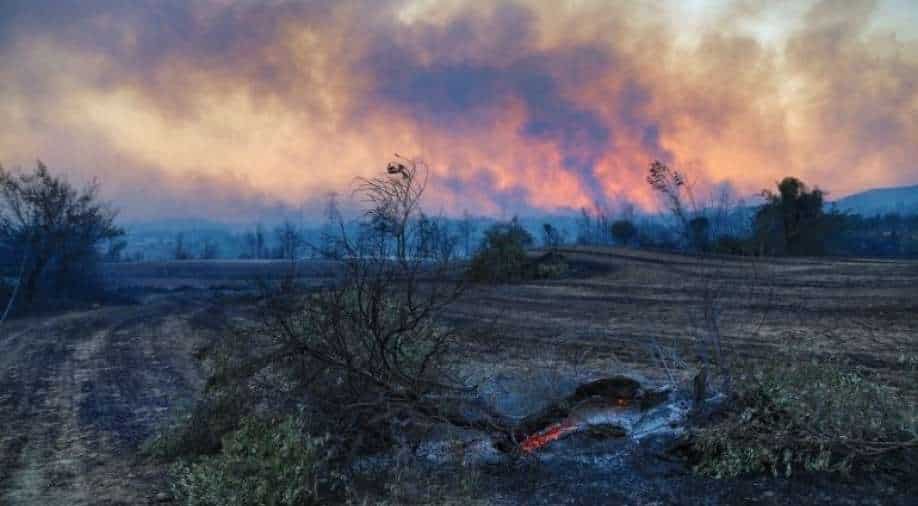 Plumes of black smoke rise from the forest around Manavgat, 75 km (45 miles) east of the resort city of Antalya, Turkey Photograph:( Reuters )

Authorities evacuated 18 villages and districts in Antalya while 16 more villages were evacuated in the neighbouring provinces of Adana and Mersin, where efforts to extinguish separate wildfires were underway

Hot weather and strong winds have caused blazes to spread around the town of Manavgat, 75 km (45 miles) east of the resort city of Antalya, and nearby villages.

Agriculture Minister Bekir Pakdemirli said on Thursday that an 82-year-old man had been found dead during the evacuation of the district of Kepezbeleni, 16 km (10 miles) northeast of Manavgat.

A group of 10 people were rescued after being stranded on a boat at the nearby Oymapinar dam.

Pakdemirli later said two others were found dead in the Degirmenli district of Antalya, some 20 km (12.5 miles) east of Manavgat, adding that efforts to contain the fire continued.

The country's AFAD disaster agency said 122 people had been impacted by the fires and that 58 were receiving treatment.

It said a firefighting plane, a drone, 19 helicopters, some 250 vehicles, and 960 personnel were part of efforts to control the blaze, while Turkey's Red Crescent sent staff and food kits to the region.

"Houses located in areas that could be impacted by the fire have been evacuated. Several homes, offices, farms, agricultural fields, greenhouses, and vehicles have been damaged by fire," AFAD said in a statement.

Authorities evacuated 18 villages and districts in Antalya while 16 more villages were evacuated in the neighbouring provinces of Adana and Mersin, where efforts to extinguish separate wildfires were underway, Pakdemirli said.

Turkey's southern Mediterranean coast, a popular destination for both local and foreign tourists, is known for its scorching summer heat, which often causes wildfires. Officials have said the latest fires are the biggest to date.

Pakdemirli said there had been 41 wildfires in 13 of Turkey's 81 provinces since Tuesday, of which 31 were under control. Blazes in Osmaniye and Kayseri are still burning.

Turkey has battled a series of disasters caused by extreme weather conditions this summer, including flash floods last week that killed six people in the Black Sea region.