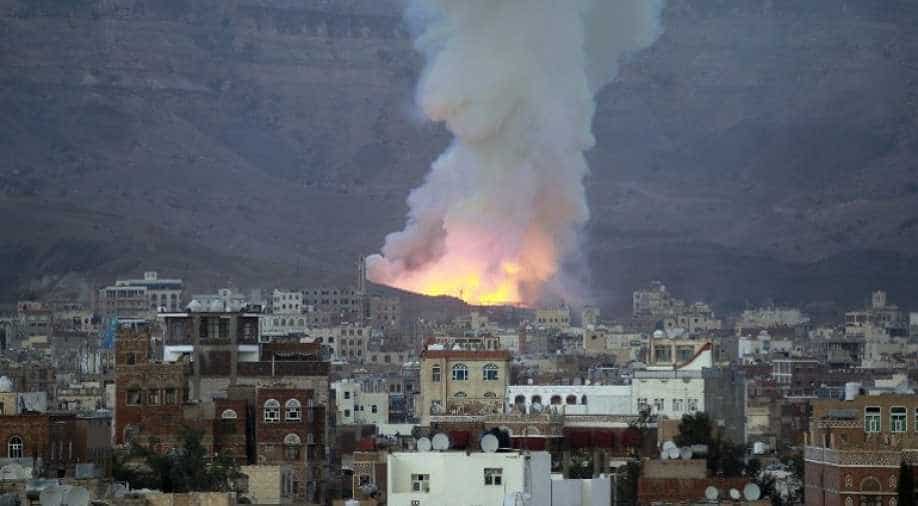 A military source with loyalist forces confirmed the strike, saying 20 civilians had died in what appeared to have been the result of a 'mistake'. (Representative image) Photograph:( AFP )

Saba news agency, which is controlled by the Iran-backed rebels, said a vehicle carrying civilians in the town of Mawzaa was hit in the raid ||The air raid targeted an area held by the Huthi rebels, said the source who confirmed that a vehicle had been struck

A suspected raid by the Saudi-led coalition in Yemen killed more than 20 civilians Wednesday, the latest in a spate of deadly strikes by the alliance that have drawn condemnation.

Saba news agency, which is controlled by the Iran-backed rebels, said a vehicle carrying civilians in the town of Mawzaa, southwest of third city Taez, was hit in the raid.

It said 23 civilians, including six children and women, were killed in a suspected raid by the Arab coalition led by regional powerhouse Saudi Arabia and that six bodies were burned beyond recognition.

A military source with loyalist forces confirmed the strike, saying 20 civilians had died in what appeared to have been the result of a "mistake".

The air raid targeted an area held by the Huthi rebels, said the source who confirmed that a vehicle had been struck.

The passengers were heading back to Mawzaa after a shopping trip to the nearby town of Barah, the military source said, adding several bodies had been torn to pieces.

There was no immediate reaction from the Saudi-led coalition, which has been battling the Huthis opposed to the government of President Abedrabbo Mansour Hadi.

The raid comes days before US President Donald Trump is to arrive Saturday in Saudi Arabia on his first foreign trip since taking office in January.

US Defence Secretary Jim Mattis warned during an April visit to Saudi Arabia of Iranian efforts to create a Yemeni militia "in the image" of Lebanon's powerful Shiite movement Hezbollah.

Mattis stressed the need to overcome Iran's efforts "in destabilising yet another country and create another militia in the image" of Lebanon's Hezbollah, which is fighting alongside government forces in Syria.

He said it was in Washington's "interest to see a strong Saudi Arabia", adding however that the United States wanted a return as "quickly as possible" to UN-backed Yemen peace talks.

The conflict in Yemen has killed more than 8,000 people and wounded around 40,000, according to the UN's World Health Organization.

Seven ceasefires alongside UN-brokered peace efforts have so far failed to stop the fighting.

The Saudi-led coalition, which intervened on the side of the Hadi government two years ago, has come under repeated criticism over civilian casualties in Yemen.

It has acknowledged responsibility in some cases, including for an air strike in October 2016 that killed 140 people and wounded 525 others at a funeral in Sanaa.

But the coalition denied responsibility for a September 2015 air strike that hit a wedding hall in southwestern Mokha, killing 131 people.

Coalition planes have dropped banned cluster munitions and killed two times more civilians than other forces, according to the UN.

Trump's Yemen focus has so far been on a major escalation of attacks against jihadists from Al-Qaeda in the Arabian Peninsula, or AQAP, which has taken advantage of the chaos in the impoverished country.

Saudi leaders worry about Iran interfering in Arab countries by using local Shiite communities, as in Bahrain, Lebanon and Yemen.

They have found a more favourable ear in Washington under Trump, who has denounced Iran's "harmful influence" in the Middle East.

The coalition mounted its air campaign in support of Hadi in March 2015, a year after the rebels overran Sanaa forcing the president to seek first refuge in the southern city of Aden and then exile in Saudi Arabia.