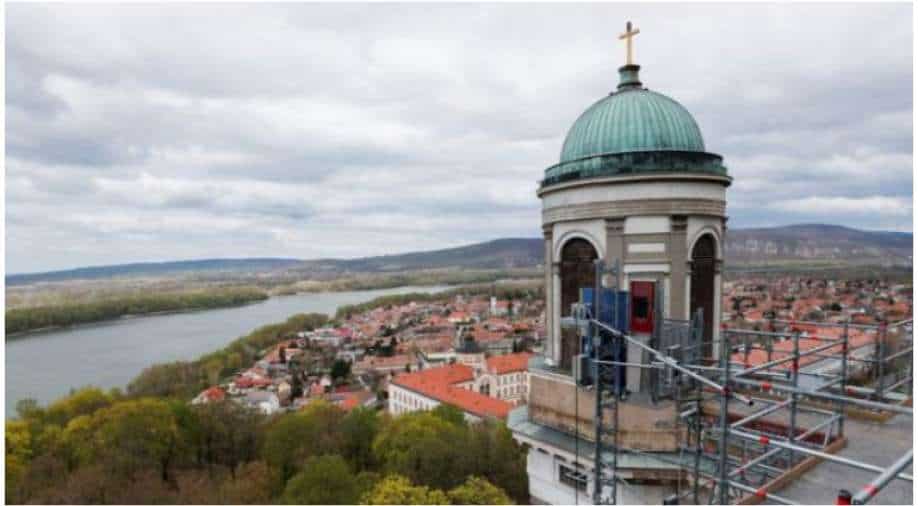 The Esztergom Cathedral is seen during the renovation of the building in Esztergom, Hungary, April 14, 2021 Photograph:( Reuters )

Check out what was inside!

The word 'time capsule' has largely come to be associated with science fiction. But the discovery of a 'time capsule' at a magnificent Hungarian cathedral has generated renewed interest. It has come to light that the cross atop Esztergom Cathedral hid a 176-year-old 'time capsule'.

The discovery was made during renovation work. The 'time capsule' is a sealed copper container inside the cross on the 100-metre dome. This dome, which is the highest in the country, survived even the bombing that took place during Second World War.

The copper container was damaged by shrapnel but when historians opened it, they discovered documents in near-perfect condition relating to the cathedral's construction.

The cylindrical capsule was placed in the cross in 1845 by Archbishop Jozsef Kopacsy and chief architect Jozsef Hild, who took over after his predecessor was murdered.

"Archbishop Kopacsy knew he would not be able to complete the construction in his lifetime, so when the cross was finished he wanted to leave inside an imprint of the memory of the builders and of that era," Torok said.

The best moment was when they found the documents: one depicting milestones in the construction and a book containing names of clergymen and parishes.

"These were last touched by human hands when they were placed there 176 years ago, so somehow we felt a sudden connection in time," he said.

"Unfortunately, we did not find any coins from the period in the capsule so there was nothing to help pay for the renovation," he added, smiling.

The cathedral was built on Castle Hill, where a church was first founded over 1000 years ago.  Its iron dome was built in Vienna and carried in sections down the Danube on barges.

For its consecration in 1856, Hungarian composer and pianist Franz Liszt composed a mass. But the cathedral was still not finished, with the main portico and interior only completed later in the 19th century.