What did WTO ministerial agree on? And why are these agreements historic? 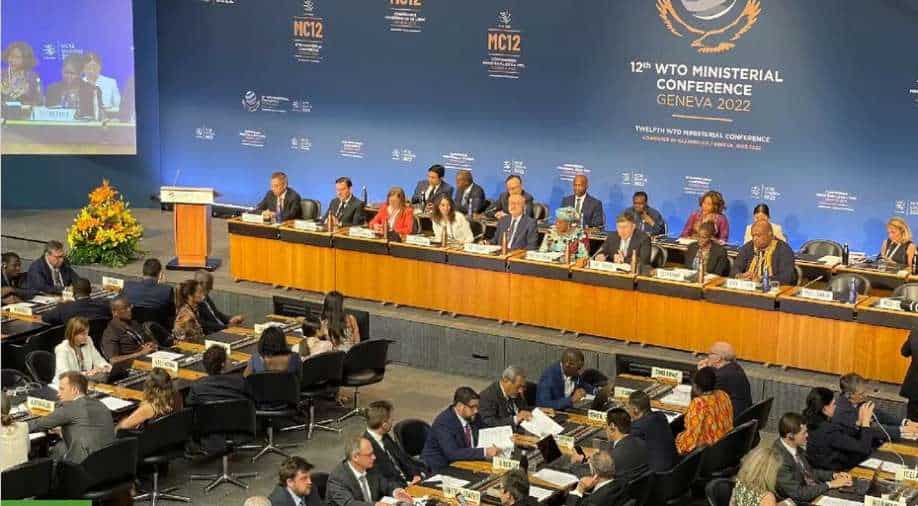 The 164 members of the World Trade Organisation (WTO) declared agreements on numerous contentious packages on Friday (June 17), including moves to control detrimental fishing subsidies, after two nights of heated negotiations in Geneva.After a nine-year pause, the WTO members have struck an agreement on fisheries subsidies.

After more than five days of arduous discussions, the 164 members of the World Trade Organization agreed to a series of trade accords early on Friday, including obligations on fish and pledges on health and food security.

It was also decided that by the next WTO ministerial conference, or no later than March 2024, a final solution to the question of the continuance of the moratorium on imposing customs charges on electronic transmission of commodities would be found.

Round-the-clock negotiations among delegations, according to the WTO, aided in the conclusion of the agreement, which included a number of decisions on fisheries subsidies, WTO response to emergencies, including a waiver of certain requirements concerning compulsory licencing for COVID-19 vaccines, food safety and agriculture, and WTO reforms.

A win-win situation for India

India adjusted the narrative and controlled it brilliantly from start to finish at the WTO ministerial session, which witnessed several landmark decisions, and the country's reputation has increased dramatically in the international community.

After seven years, a ministerial conference finally produced a result. Ministerial decisions were made on all topics except agriculture, which was expected. a total of eight or nine, with several ground-breaking verdicts.

What was accomplished in the WTO, according to sources, is a tremendous achievement.According to the insiders, India's reputation has shifted from deal-breaker to deal-maker, which was impossible a year ago.

The following are the specifics of historic agreements:

Response to the Covid-19 pandemic

For more than a year, India, South Africa, and other developing countries have sought a waiver of intellectual property rights for COVID-19 vaccines, treatments, and diagnostics, but have been met with opposition from numerous developed countries with large pharmaceutical companies.

In May, a tentative agreement confined to vaccines was reached amongst the main parties – India, South Africa, the United States, and the European Union – and this is largely what has been implemented.

Developing countries will be able to use a patent for manufacturing and supplying without the approval of the patent holder for a period of five years, with the possibility of an extension. Production does not have to be primarily for the home market, allowing for larger exports to provide fair access.

WTO members must consider extending the waiver to pharmaceuticals and diagnostics within six months.China has freely chosen to opt out of the waiver, which the US had insisted on.

Members were advised to reject the wording because it was too restrictive and not a true IP waiver, according to campaign groups.The WTO also agreed on a declaration on its reaction to COVID-19 and future pandemic preparedness, with a focus on the requirements of LDCs.

Members also agreed that any emergency trade measures should be proportionate and temporary, and that supply chains should not be disrupted unnecessarily. Imposing export restrictions on vital medical supplies should also be done with caution.

Illegal fishing to be tackled

WTO members in the fishing sector have agreed to eliminate subsidies that contribute to overfishing, a step that environmentalists say is critical to reviving fish stocks.

The negotiations have lasted 20 years, and the agreement is only the WTO's second multilateral agreement on new global trade rules in its 27-year history. The outcome in the fisheries case was considered as a litmus test for the WTO's own credibility.

According to the agreement, no WTO member may provide a subsidy to vessels or operators who engage in illicit, unreported, or unregulated fishing, or who fish an overfished stock.

For two years, developing countries will be exempt.Members will conduct their own investigations into activities off their shores, and all members will be compelled to report their fishing subsidy schemes to the WTO.

India had previously been one of the most vocal opponents.However, discussions will continue in order to reach a more complete agreement on fishing subsidies in time for the next ministerial conference, which is expected to take place in 2023.

Actions to ease trade in food and agriculture

Members of the World Trade Organization (WTO) agreed in a declaration to take specific actions to ease trade in food and agriculture, including cereals, fertilisers, and other agricultural inputs, and emphasised the significance of lowering export restrictions.

Members of the World Trade Organization (WTO) also agreed to a binding commitment not to stifle exports to the World Food Programme (WFP), which works to alleviate hunger in areas affected by conflict, natural disasters, and climate change. Members would still have the option of taking steps to assure their own food security.

WTO members have extended a moratorium on imposing customs taxes on electronic communications worth hundreds of billions of dollars per year, ranging from streaming services to financial transactions and corporate data flows.

The ban has been in effect since 1998. South Africa and India were initially opposed to the extension, claiming that they should not lose revenue from customs.

The extension will last until the next ministerial meeting, which is expected to take place by the end of 2023 but will expire on March 31, 2024 in any case.

WTO rules are being revised

WTO members agree that the organization's rules need to be updated, but they disagree on what modifications are needed.

Members agreed to work toward WTO reforms in order to strengthen the organization's activities. This effort should be open and transparent, and it should take into account the interests of all members, including developing countries, which are given preferential consideration.

By 2024, the WTO has committed to holding discussions in order to establish a fully functional dispute settlement system.

What did WTO ministerial agree on? And why are these agreements historic?

Why is health insurance for senior citizens important?