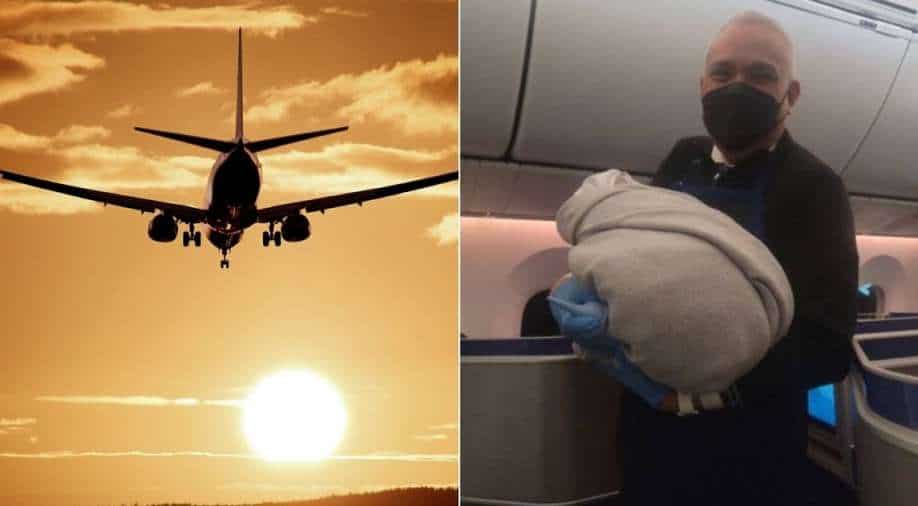 A woman, who was not due till late February, delivers the baby on a plane. Photograph:( Others )

A woman delivered a baby on a plane while she was flying from Ghana to the United States. As per reports, the woman gave birth to a baby boy over 30,000ft in the air during an 11-hour transatlantic United Airlines flight on January 29.

The woman was travelling from Accra, Ghana, to Washington, DC and reports have mentioned that she was not due till late February. Unexpectedly, she went into labour but luckily a Ghanaian doctor was also on the flight.

Dr Stephen Ansah-Addo, who practices in the US now, was joined by a former nurse-turned-flight attendant and there was another nurse on the flight.

They converted the plane's business class area into a maternity unit and helped the woman deliver a premature baby, but the child is said to be in good health. The woman named the newborn GG.

While reacting to the news, Dr Addo was quoted by the media: "I couldn’t believe it was happening. But I was trying to stay calm."

"Myself, a nurse and the flight attendants... took [the mother] slowly through the process and she delivered a beautiful baby boy," the doctor added.

The team of three used a string to cut the umbilical cord as they didn't have any clamps. The doctor said: "This is someone that really needed help, because there was nobody else there. This is the kind of medicine where you can make a difference in people’s lives."

In the aftermath, United Airlines said in a statement that the delivery was uneventful and the woman who gave birth and the baby boy were attended by the paramedics when the flight landed in Dulles International Airport in Washington DC. They were then taken to a local hospital.

The spokesperson added: "And we were especially thrilled to see the plane land with one extra, especially beautiful, customer onboard."

Woman gives birth on United Airlines Flight from Ghana to US.

A Ghanaian doctor practising in the United States of America, was the hero of the day when he delivered a baby on a flight en route to the US from Ghana. pic.twitter.com/yu6bNmoB7h