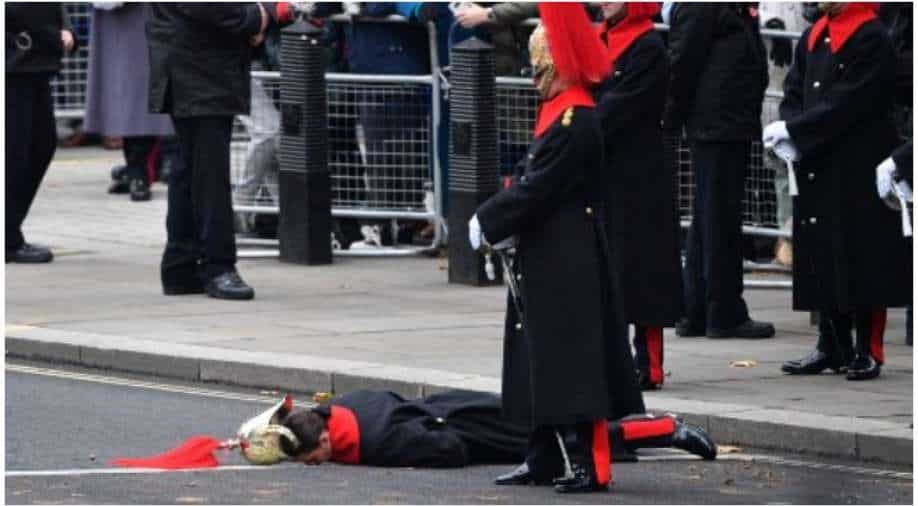 A member of the Household Cavalry appears to faint ahead of the Remembrance Sunday ceremony at the Cenotaph on Whitehall in central London, on November 14, 2021. Remembrance Sunday is an annual commemoration held on the closest Sunday to Armistice Day, November 11, the anniversary of the end of the First World War and services across Commonwealth countries remember servicemen and women who have fallen in the line of duty since WWI. Photograph:( AFP )

Soldiers in largely ceremonial units are often called for duty during ceremonies that see attendance from British royals. These soldiers have to adhere to extremely strict rules which sometimes see them performing duties without sip of water for hours. It was not immediately clear why the female soldier fainted ahead of Remembrance Sunday ceremony

A female soldier in UK Queen Elizabeth's Household Cavalary appeared to faint ahead of Remembrance Sunday ceremony on November 14 (local time). The image of the soldier, dressed in ceremonial wear in traditional military uniform at the time of a ceremony marked by tradition was a shocking site.

Onlookers could be seen casting bewildered glances at the fainted soldier. One of her comrade looked at his fainted colleague while another looked on.

It was not immediately clear why the female soldier fainted.

Soldiers in largely ceremonial units are often called for duty for traditional ceremonies attended by British royals. There are extremely strict rules governing the duties and conduct of these soldiers who sometimes even have to go without water. In some ceremonial units, if a soldier faints, other soldiers in the unit are not allowed to help him but carry on their duties.

UK Queen Elizabeth missed Remebrance Sunday service this year due to sprained back. A Buckingham Palace source was quoted by Reuters as saying that the sprain was unrelated to the unspecified ailment that caused the queen's hospital visit recently.

Remembrance Sunday ceremony is held on the nearest Sunday to Nov. 11 to mark the end of World War One. The sight of the queen at the event has been one of the defining images of her reign through the decades: head bowed, wearing black and displaying a red poppy.

The royal family joins leading members of the government, overseas representatives, and military on Remembrance Sunday to lay wreaths in commemoration of those who lost their lives in conflict.

In recent years, the queen's son and heir, Prince Charles, has laid a wreath on her behalf while she watches from a balcony at the Foreign and Commonwealth Office.

Charles, who turned 73 on Sunday, laid the wreath again this year, while his wife Camilla, along with Kate, Duchess of Cambridge, and Sophie, Countess of Wessex, watched from the balcony.

Thousands of veterans later marched past the Cenotaph, led by the band of the Coldstream Guards.

The queen is the world's oldest and longest-reigning monarch. Since being advised to rest, she has missed events such as the COP26 climate conference in Glasgow and a festival to remember the nation's war dead on Saturday evening.