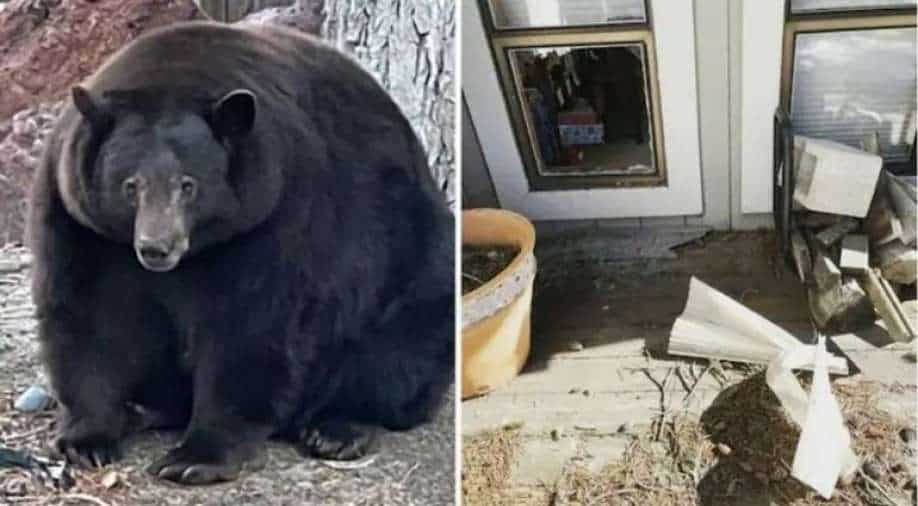 In this combination of images, 'Hank the Tank' (L) can be seen along with a property damaged by the giant bear in California (R). Photograph:( Twitter )

According to the California Department of Fish and Wildlife (CDFW), it has caused extensive damage at 33 properties and forcefully entered at least 28 homes

California police is looking for a 500-pound notorious bear known by residents as 'Hank the Tank' for breaking into homes.

According to the California Department of Fish and Wildlife (CDFW), it has caused extensive damage at 33 properties and forcefully entered at least 28 homes. The giant bear has eluded capture for more than seven months.

"The incidents primarily occurred during the summer and fall of 2021, when the bear was in hyperphagia, adding calories to survive the winter," said wildlife department spokesperson Peter Tira.

The bear is responsible for more than 150 incident reports in the region straddling Northern California and Nevada.

The bear smashed a window and squeezed into the house on Catalina Drive while the residents were at home. Police responded and banged on the outside of the house until Hank exited out the back door and disappeared into the woods.

Also known as Jake or Yogi or simply Big Guy, the bear is what Tira described as a “severely food habituated bear” that has “lost all fear of people” and thinks of them as a food source.

A homeowners association agreed during a meeting last week to allow state wildlife personnel to capture the bear. Previous trapping efforts, which are generally more successful in wooded settings, have proven futile in residential areas where the bear has become acclimated.

"He's not subsisting on a diet of ants and berries like a lot of wild bears do," Tira said.

"In Tahoe there's year-round access to high caloric food - whether we're talking about leftover pizza or ice cream or just trash," he continues.

"It's easier to find that kind of food than to work for hours to remove grubs from a dead log."

If Hank is captured, officials said the bear could be relocated to accredited facilities such as zoos and wildlife sanctuaries, Tira said.

“You relocate it to the wilderness, and they starve because they’re not used to hunting for food,” Tira said.

Killing the bear is hopefully a last resort, said Joby Cefalu, a board member with the homeowners association.

“Nobody on our board took lightly the situation of depredation,” Cefalu told the Los Angeles Times. “We’re meant to coexist. Unfortunately, this is a human problem.”