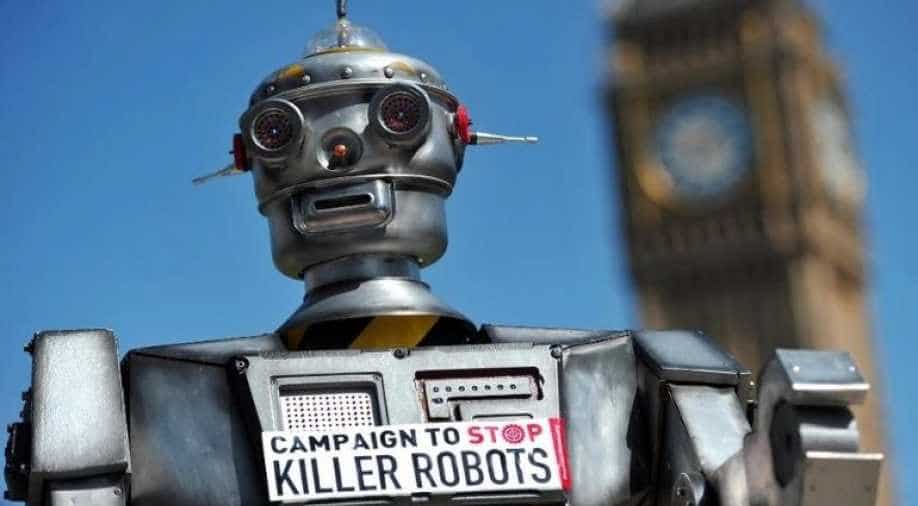 A mock "killer robot" is pictured in central London on April 23, 2013 during the launching of the Campaign to Stop "Killer Robots," which calls for the ban of lethal robot weapons that would be able to select and attack targets without any human intervent Photograph:( AFP )

Are killer robots the next threat faced by humanity? A United Nations report claims that a killer drone trailed and attacked a human being without directives to do the same.

In 2018, the United Nations had urged countries to ban killer robots. But the plea was shot down.  The recent report by UN Security Council’s Panel of Experts on Libya claims that “an autonomous weaponized drone hunted down a human target last year”.

The report was published in March 2021 in the New Scientist and foretells the dangers posed by militarised technology capable of making autonomous decisions. The attack in question was perpetrated by "Kargu-2", a quadcopter drone made by STM, a Turkish military technology company.

How did the robot attack humans?

The mishap occurred during a conflict between the government forces of Libya and a faction led by Khalifa Haftar, the commander of Libyan National Army, The Star reported.

Reportedly, the Kargu-2 is in-built with an explosive charge and can be used for kamikaze attacks.

The drones were running on an autonomous mode which required no human moderation, for such weapons system do not require data connectivity between the “operator and the munition”. This essentially implies that the killer robots made the decision to attack independently.

What does the world say?

But many experts believe that the drone’s ability to attack humans points to the dangers posed by such autonomous weapon technology. In 2020, Human Rights Watch urged caution with such technology and implored countries to legislate against killer robots. 30 countries backed the plan to fully ban autonomous weapons, or as they’re more commonly called - “killer robots”, a report by Human Rights Watch released in August 2020 revealed.

A coalition of 161 non-governmental organisations including the HRW has been pleading for a complete ban on such weapons since 2013.

"Weapons systems that select and engage targets without meaningful human control are unacceptable and need to be prevented," HRW said.