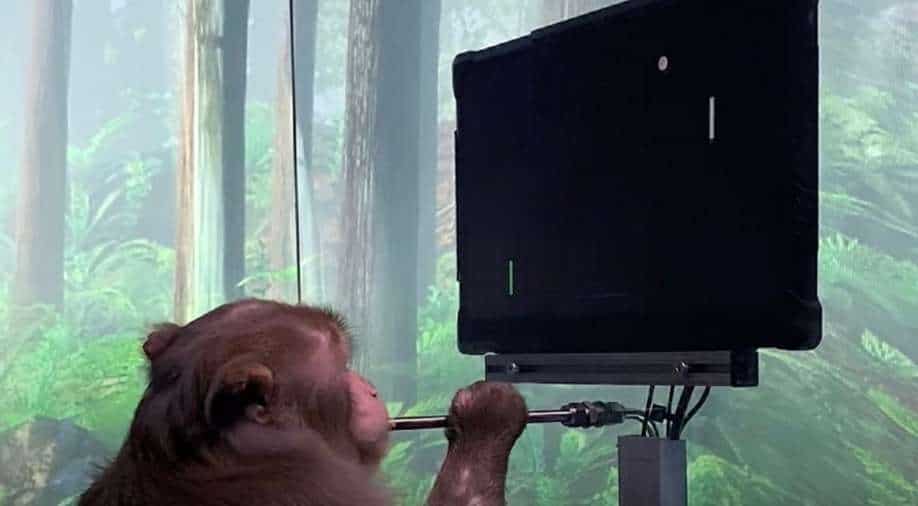 The three-minute video released by the San Francisco-based company shows a male monkey called Pager with Neuralink chips implanted on each side of its brain, using a joystick to follow a cursor on a screen

The three-minute video released by the San Francisco-based company shows a male monkey called Pager with Neuralink chips implanted on each side of its brain, using a joystick to follow a cursor on a screen.

The voice-over explains that Neuralink records from more than 2000 electrodes implanted in the regions of the monkey's motor cortex that coordinate hand and arm movements.

"Using these data, we calibrate the decoder by mathematically modelling the relationship between patterns of neural activity and the different joystick movements they produce. After only a few minutes of calibration, we can use the output from the decoder to move the cursor instead of the joystick," the voice-over says.

The monkey still moves the joystick out of habit, but the scientists have unplugged it; Pager is controlling the cursor entirely with decoded neural activity.

The video goes on to show Pager playing 'Mind Pong'; controlling his paddle simply by thinking about moving his hand up or down.

The voice-over adds: "He's focussed and he's playing entirely of his own volition. It's not magic. The reason Neuralink works is because it's recording and decoding electrical signals from the brain."

Co-founded by Musk in 2016, Neuralink aims to implant wireless brain-computer interfaces that include thousands of electrodes in the most complex human organ to help cure neurological conditions like Alzheimer's, dementia and spinal cord injuries and ultimately fuse humankind with artificial intelligence.

In August 2020, Musk unveiled a pig with a Neuralink chip installed, at the time describing it as "a Fitbit in your skull".

Musk has a history of bringing together diverse experts to drastically accelerate the development of innovations previously limited to academic labs, including rocket, hyperloop and electrical vehicle technologies through companies such as Tesla Inc and SpaceX.