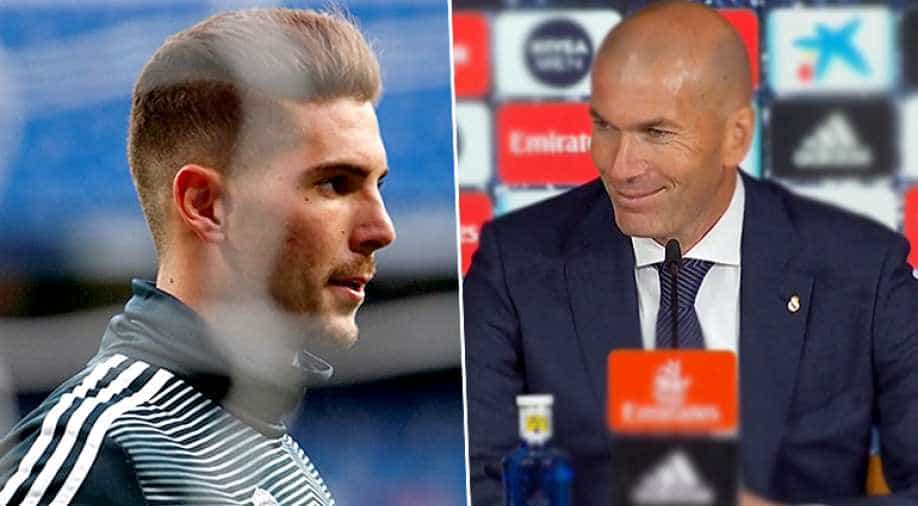 Luca Zidane, 20, is the number one goalkeeper for Madrid's reserve side Castilla and he had not featured for the first team since making his debut in a 2-2 draw against Villarreal on the final day of last season.

Real Madrid coach Zinedine Zidane's son Luca made his first appearance for the team in over 10 months after he was recalled to the side for Sunday's La Liga clash at home to Huesca, which Real won 3-2.

Luca Zidane, 20, is the number one goalkeeper for Madrid's reserve side Castilla and he had not featured for the first team since making his debut in a 2-2 draw against Villarreal on the final day of last season.

His second game for the club got off to a difficult start as he was forced to pick the ball out of the net in the third minute after being beaten by a thumping drive by Cucho Hernandez.

But he showed impressive distribution skills later in the half, starting a promising attack with a long kick out of his hands which landed at the feet of Brahim Diaz just outside Huesca's area.

Madrid levelled through Isco then Dani Ceballos gave them the lead but Luca Zidane was beaten again by La Liga's basement club later in the second half when Xabier Etxeita headed home.

Karim Benzema snatched all three points for the deposed European champions with a magnificent curling strike in the 89th minute.

Luca was completely discarded by his father's successor Julen Lopetegui, who did not include him in the matchday squad for a single game.

He also failed to play any first team football under Real's next coach Santiago Solari - although he was named on the substitutes bench for four games in January, when Thibaut Courtois and then Keylor Navas were out injured.

Courtois had picked up a thigh injury on international duty with Belgium and with little riding on the game for Madrid, who are effectively out of the title race, Zidane opted to pick his son ahead of Navas, who had been in action for Costa Rica.

Zidane also praised Benzema, saying that this season was proabaly his best in his ten years at the club.