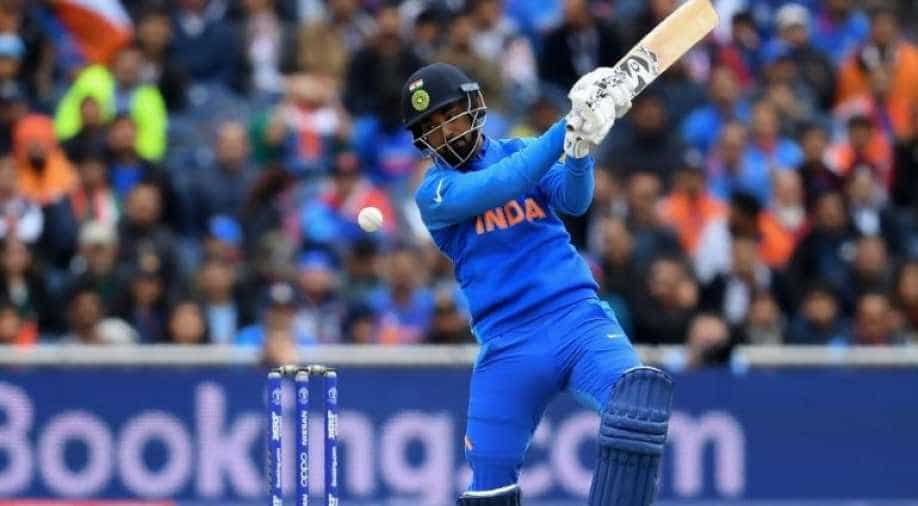 On India's not so impressive batting show in the past two games, Rahul said that both wickets weren't easy for scoring runs

KL Rahul is "disappointed" at not being able to convert his starts but not at all "worried" as he believes that he is doing a lot of things right.

Rahul had scores of 26, 11 not out, 57, 30 and 48 in five completed games and barring the one against Australia where he came in at the fag end of the innings, he has got out after getting set.

"It's a bit disappointing," the talented Karnataka batsman said, accepting that he should have gone on to score a few more runs. I am doing the hard work in getting through the first 10 or 15 overs, or as an opening batsmen, scoring the first 25, 30 runs, which is the hardest. (But then getting out) when the time comes to accelerate and maybe take the game deeper, so a bit disappointed that I have not been able to do that," Rahul lamented.

He will certainly assess and do the course correction but he does not want to brood over what has already done.

"But again I can sit, I will sit and assess, but it won't worry me that much because there are a lot of things I'm doing right, and I know that the mistakes I've made I can learn from them and get better," Rahul said at the post-match press conference after India beat the West Indies by 125 runs on Thursday.

He got out playing a reverse sweep to off-spinner Mohammed Nabi against Afganistan and versus West Indies, it was a pitched up delivery from Jason Holder that brought about his downfall.

"Against Afghanistan, I would not say it (reverse sweep) was a bad shot. It was a shot I play all the time. And more often than not I hit it for four, so I get it away. But unfortunately, I did not execute it," Rahul said.

"But the planning and the timing of that shot maybe was questionable because I needed to stitch up a partnership with Virat," he admitted.

"And today (vs West Indies), as a batsman, it disappoints you but then again you know bowlers are allowed to bowl good balls. And you do make mistakes. And I can't sit back and break my head about it. I just go on and try to start fresh in Birmingham and try to get a big one," Rahul said.

He was always "ready" to juggle up and down the order, and Shikhar Dhawan's untimely injury did not change much for him.

"I know that Shikhar getting injured was unfortunate. And I had to go to the top of the order. But not that I never prepared for opening the batting. In my head, the last one or two years I have been preparing for whatever might be my role," the 27-year-old right-handed batsman said.

In fact, he is more comfortable opening the batting as that has been his natural slot in all forms of cricket.

"I had to prepare hard for number four because that's not where I batted all my life. I did that. And now to come back to open the batting again, it's just a bit more comfortable and easier for me because I've batted it all my life," Rahul said.

On India's not so impressive batting show in the past two games, Rahul said that both wickets weren't easy for scoring runs.

In fact, he revealed that when he and Rohit were batting, they had sent a message to the dressing room that the wicket was two-paced and 260 was a par-score.

Asked about Virat Kohli once again looking like a different player compared to all others who struggled, Rahul said it's his special ability to get runs irrespective of the conditions.

"I don't think he's doing anything different. He has been doing the same thing for how long I can remember since the time he started playing cricket, this is what he has been doing, performing consistently," he observed.