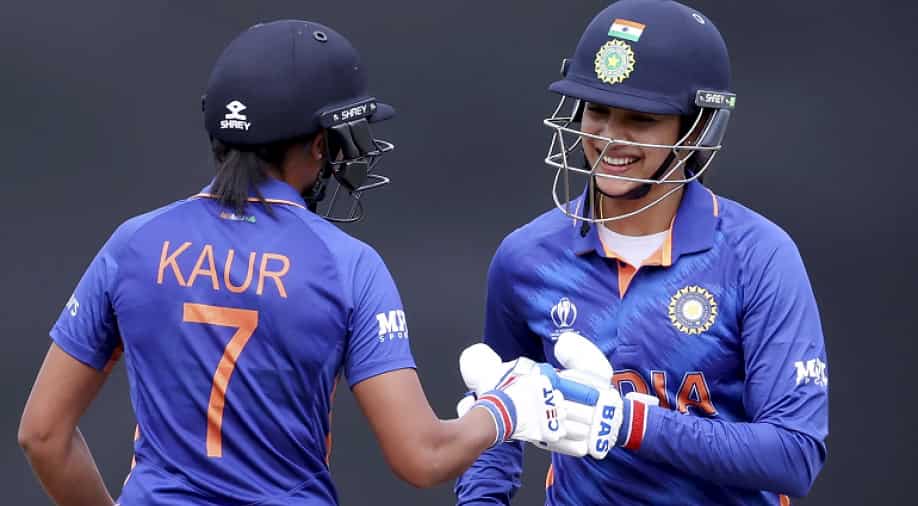 Smriti Mandhana and Harmanpreet Kaur wowed the fans with their amazing batting as the duo went on to post a record stand for India in their clash against West Indies in the ongoing ICC Women's ODI World Cup 2022.

Smriti Mandhana and Harmanpreet Kaur combined to post a record partnership for the Indian women's team in their ongoing clash against West Indies in the ongoing ICC Women's ODI World Cup 2022. The duo looked in fabulous touch as they notched up centuries apiece to help India post a strong total of 317/8 in 50 overs. It was an amazing batting display by the duo, who shun their critics in style with their brilliant knocks.

After being criticised for their poor show in their last outing against New Zealand, the Indian women's team bounced back in style. After a good start, India were in a tricky spot having been reduced to 78/3 in the 14th after losing skipper Mithali Raj and Deepti Sharma in quick succession.

However, Mandhana and Harmanpreet combined to rescue India's innings with hundreds apiece. While Mandhana scored 123 runs off just 119 balls, Harmanpreet notched up 109 runs off 107 balls. The duo slammed 23 fours and four sixes between them to add a stunning 184-run stand for the fourth wicket.

The 184-run partnership between them is the highest for India in the Women's World Cup history and the fourth-highest partnership in ODI cricket. With the help of the heroics from the duo, India managed to breach the 300-run mark as they finished with 317 runs on the board.

The onus is now on the bowlers to defend the total and secure India's second win at the tournament. India had won their opening game against Pakistan convincingly before slipping to a defeat against New Zealand in their next game. The Women in Blue will be hoping to get back to winning ways against West Indies on Saturday.