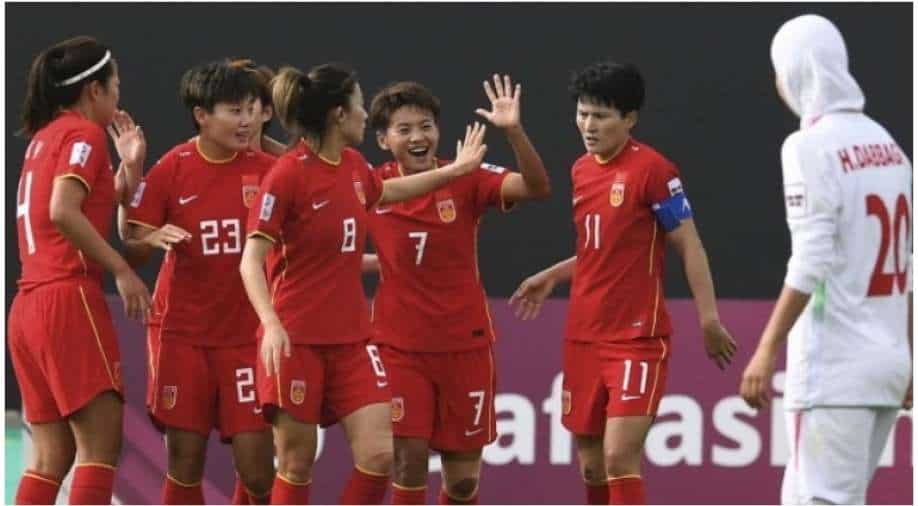 Yui Narumiya scored twice, with her goals coming either side of an effort from former Asian Women`s Player of the Year Saki Kumagai.

Defending champions Japan beat Vietnam 3-0 at the Women`s Asian Cup in Pune on Monday to book their place in the quarter-finals alongside Australia and South Korea.

Yui Narumiya scored twice, with her goals coming either side of an effort from former Asian Women`s Player of the Year Saki Kumagai.

Victory means Japan go into their final game in Group C against South Korea on Thursday guaranteed a top-two finish.
Futoshi Ikeda`s side had to wait until the 38th minute to take the lead when Narumiya netted from close range, while Kumagai claimed a rare international goal from similar range five minutes into the second half.

Narumiya beat Vietnam goalkeeper Tran Thi Kim Thanh to her left in the 58th minute to put the seal on a comfortable win for the 2014 and 2018 winners.

The result ensures South Korea also advance after their 2-0 win over Myanmar earlier in the day.
The Koreans struggled to break down their defensively disciplined opponents but finally opened their account five minutes into the second half when Lee Geum-min netted following Cho So-hyun`s cushioned header.

Chelsea midfielder Ji So-yun was instrumental in the second goal six minutes from time when her header back across the target brushed against defender Tun Khin Mo Mo before crossing the line via the inside of the post.
The Australians confirmed their place in the next round when a decisive second-half showing saw Tony Gustavsson`s side defeat Philippines 4-0 in Mumbai.

After a goalless first half, Sam Kerr opened the scoring with a 51st-minute header before Dominique Randle`s own goal two minutes later put the Matildas in control of the Group B encounter.

Emily van Egmond and Mary Fowler were also on target as the Australians defeated a Philippines side directed by former Matildas coach Alen Stajcic.

The win, coupled with their 18-0 thrashing of Indonesia on the opening day, means the Australians are guaranteed a place in the last eight ahead.

Thailand kept alive their hopes of a quarter-final place with a comfortable 4-0 win over Indonesia.
Kanyanat Chetthabutr scored a hat-trick before Dee Makris scored her side`s fourth as the Thais moved level on three points with the Philippines, with Australia on top of the group.

The top two finishers in each of the three groups will advance to the knockout rounds along with the two third-place finishers with the best records.

The competition is doubling up as Asia`s qualifier for next year`s Women`s World Cup, with the continent awarded five guaranteed spots at the finals in Australia and New Zealand.
Australia qualify for the World Cup as co-hosts while two other Asian nations will feature in an intercontinental playoff round.