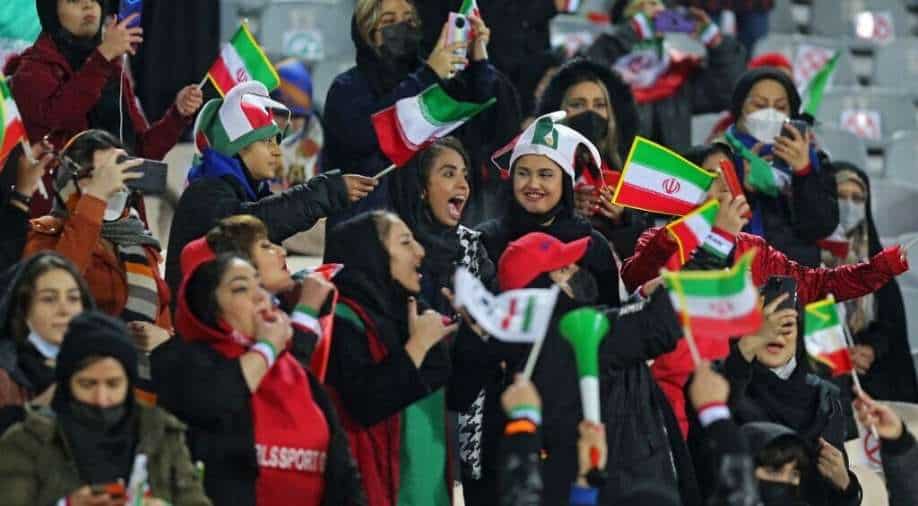 Female supporters of Iran’s national soccer team cheer during the 2022 Qatar World Cup Asian Qualifiers match between Iran and Iraq, at the Azadi Sports Complex in the capital Tehran, on January 27, 2022. Photograph:( AFP )

Hundreds of female fans protest outside stadium in city of Mashhad; FIFA has demanded Iranian authorities allow women into the games

FIFA should utilise its clout with the Iranian government to demand that the country's discriminatory stadium ban be lifted immediately and that abusers be held accountable.

Women were barred from entering the sports stadium in Mashhad, Khorasan province, to attend a FIFA World Cup Qatar 2022 qualification match between Iran and Lebanon. This included those who had apparently already purchased tickets.

Women gathered in front of the stadium, according to videos shared on social media, and authorities used pepper spray to disperse them.

According to the semi-official ISNA news agency, 12,500 tickets were sold online, with 2,000 earmarked for women.

In the match, Iran defeated Lebanon 2-0.

Mar. 29 - Mashhad, NE #Iran
A large number of women protested today because they were banned (despite buying tickets) from entering the stadium where Iran&Lebanon were to compete in a soccer match.
According to the mullahs, it's unsuitable for women to watch sports matches. pic.twitter.com/MAF7XC5t9C

A win over Iraq in January guaranteed the team a place in the World Cup in Qatar.

In response to the decision to bar female soccer supporters from attending the match in Mashhad, a video circulating on social media shows hundreds of female soccer fans yelling, "We have an objection."

It was not immediately clear who made the decision to block the women from attending the match.

Khabaronline, an Iranian news website, said that "despite tickets being sold, women are still not allowed to attend the stadium."

FIFA has long asked that Iran provide guarantees that women will be permitted to compete in World Cup qualifiers in 2022.

Since the 1979 Islamic revolution, women have been largely barred from attending men's games and other sporting activities in Iran.

He referred to their presence as "vulgarity."