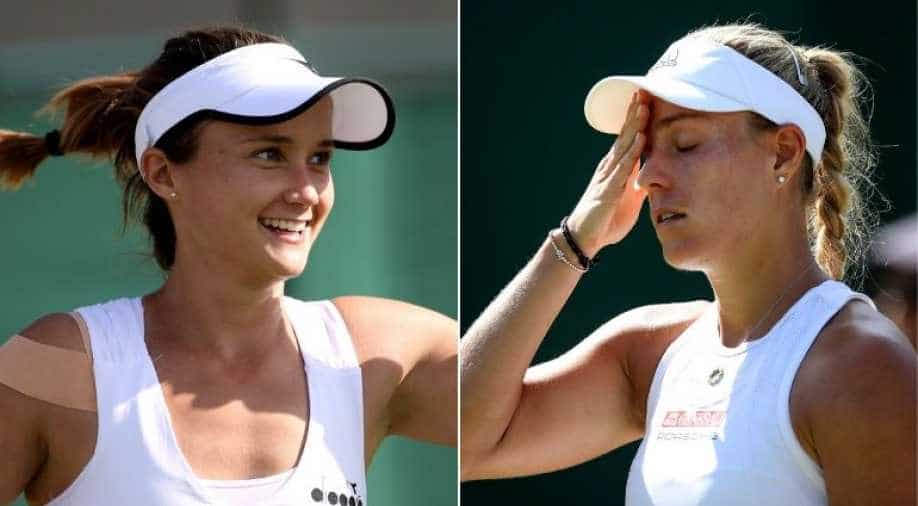 After taking the second set, the 25-year-old Davis turned the screw on Court Two and wrapped up victory in an hour and 55 minutes when fifth seed Kerber netted

Defending champion Angelique Kerber was dumped out of Wimbledon on Thursday as she suffered a stunning 2-6, 6-2, 6-1 second-round defeat by American Lauren Davis, who began the year ranked outside the world's top 250.

Davis, who at 5 ft 2 in (1.57 metres) is a diminutive figure on the women's tour, stood tall to secure a remarkable victory over the three-times Grand Slam champion who beat Serena Williams to win last year's final.

German Kerber raced through the first set before the match turned wildly on its head and Davis, who needed a lucky-loser spot to play in the tournament, lost only three more games.

After taking the second set, the 25-year-old Davis turned the screw on Court Two and wrapped up victory in an hour and 55 minutes when fifth seed Kerber netted.

A rapid rise back up the rankings had taken her up to number 95 heading into Wimbledon, where she lost in the qualifiers before being handed a reprieve with a lucky loser spot after a wildcard entry went unused.

"It's definitely been incredible. I was super disappointed having lost the last round of quallies," she said. "I found out less than two hours later that I got into main. I was ecstatic ... It's honestly a dream being here."

Davis was the more aggressive, outhitting Kerber with 45 winners to 13, and broke the German's serve eight times in the match to set up a third-round meeting with number 30 seed Carla Suarez Navarro.

The contest had started well for Kerber as she broke for a 4-2 lead in the first set and then again to love in the eighth game to clinch the opener.

Yet after a visit from the trainer, Davis turned the encounter on its head.

After the second set began with three breaks of serve, Davis held to get her nose ahead 3-1 and broke again for a 4-1 lead.

After failing to convert her first two match points at 5-1, Davis made no mistake with the third when a strong return forced Kerber to net.

"Of course I'm disappointed. Of course, it's not the way I would like to finish here or to play here. But you have sometimes days like that. You have to accept it. You have to learn from it, trying to forget this as soon as possible," said Kerber.