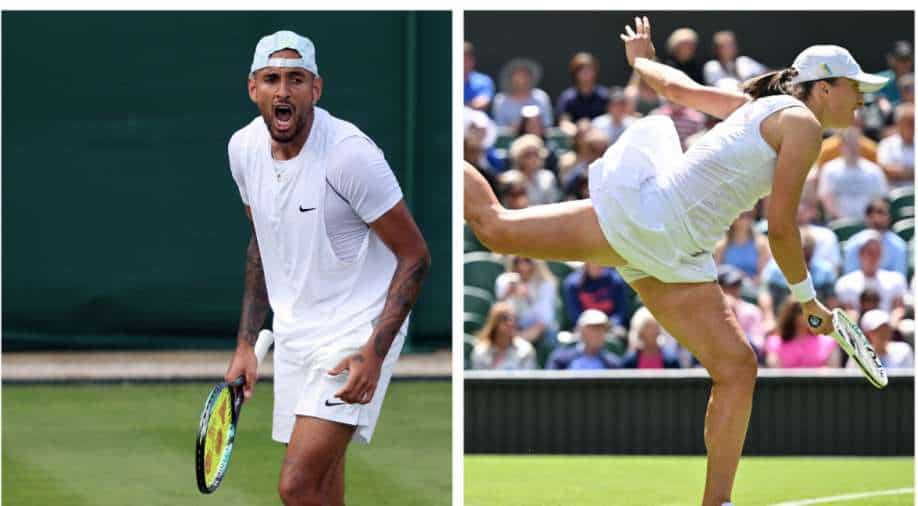 Iga Swiatek, who played with a ribbon in Ukrainian colours pinned to her cap as she did during her Roland Garros campaign, broke back immediately -- only to hand back the advantage in her next service game.

World number one Iga Swiatek recovered from a dip in her level in the second set to see off Croatian qualifier Jana Fett 6-0 6-3 in the Wimbledon first round on Tuesday and extend her winning run to 36 matches. The 2018 junior champion, who exited the grasscourt Grand Slam in the fourth round last year, had the honour of opening the second day`s play on Centre Court in the absence of the retired Ash Barty who won the 2021 title.

Playing her first match since winning a second French Open title this month, Poland`s Swiatek powered through the opening set without losing a game -- registering a 6-0 set for the 17th time this year -- despite a stiff breeze swirling through the main show court. A litany of unforced errors, including a double fault, however, led to Swiatek dropping serve at the start of the second set, allowing the 25-year-old Fett, ranked 252nd in the world, to get on the scoreboard.

Swiatek, who played with a ribbon in Ukrainian colours pinned to her cap as she did during her Roland Garros campaign, broke back immediately -- only to hand back the advantage in her next service game.
The Pole`s struggles with her delivery continued as she had to save five break points to hold serve for the first time in the second set to get to 2-3 and stay in touch with Fett. The hold seemed to spur on Swiatek and she won five games in a row to become the first women`s player in the 21st century to win 36 consecutive matches.

She will meet British wildcard Sonay Kartal or Dutch lucky loser Lesley Pattinama Kerkhove for a place in the third round. "It`s my first match on grass this season so I knew it`s going to be tricky," said the 21-year-old. "At the beginning of the second set I lost my focus little bit and she used that pretty well.
"I am pretty happy that I came back and I could finish in two sets. I am just figuring out how to play here and trying to implement all the stuff we were practising. It`s pretty exciting, a new experience for me."

Feisty Australian Nick Kyrgios came through a five-set first-round Wimbledon thriller against British wildcard Paul Jubb on Tuesday as his fearsome serve, including 30 aces, eventually overpowered the 22-year-old 3-6 6-1 7-5 6-7(3) 7-5. It was an unexpectedly testing examination for Kyrgios as the British outsider kept his cool in the face of the Australian`s usual verbal antics, but fell just short.

"It was tough, he had nothing to lose and he played exceptional tennis at times," Kyrgios said. "He`s going to be a good player for sure, I`m just happy to get through. "Playing here is a lot of fun. I talk a lot on the court but off the court I`m not too bad."

Kyrgios looked pretty flat in losing the opening set to a player whose career highlight was winning the U.S. NCAA college title in 2019, and in his frustration he hammered a ball high and out of Court Three.
Kyrgios is a player the word "chuntering" was invented for as he seems to need to keep up a running monologue to get himself motivated. He took great offence at a single fan uttering an almost polite boo, complaining to the umpire "You don`t accept a hat with two logos on but you accept disrespect of an athlete?".

Kyrgios then complained about a line judge "reporting him" to the umpire. "Not one person has come here today to hear her speak," he said.

The chat appeared to energise him as he began to find his range in a strong second set but Jubb refused to lie down, being edged out in the third and going toe to toe to take the fourth on the back of a strong tiebreak. The Briton, in only his second Wimbledon appearance having lost in the first round three years ago, was ice-cool in ignoring any potential distraction from Kyrgios’s running commentary, which included another extended whinge over a non-signalled net cord in the tiebreak.

It is now eight years since Kyrgios stunned then world number one Rafa Nadal to reach the Wimbledon quarter-finals but he has never matched that since and has reached only one other Grand Slam quarter – in Australia in 2015. The 27-year-old has slipped to world number 40 but his serve remains out of the top drawer, demonstrated when he ripped through the third game of the deciding set to love in 43 seconds before breaking Jubb.

When serving for the set, however, Kyrgios stood back to admire a drop shot, only to be left stranded when Jubb brilliantly ran it down en route to his own break back. Jubb then failed to convert a break point and, serving to take the match to a decisive tiebreak, leaked a couple of shots wide to help Kyrgios secure victory.

Coco Gauff made sure she was not thrown off course by the noisy racket created by Nick Kyrgios in a nearby court or by the fact she managed to convert only four of 25 break points as she reached the Wimbledon second round on Tuesday. With Australian hot-head Kyrgios up to his usual antics, yelling at the umpire and involved in heated exchanges with other officials during his first-round match, the commotion from Court Three might have distracted Gauff as she lost the opening seven points to Elena-Gabriela Ruse.
But despite the inauspicious start, and her growing frustration in failing to convert so many break points, the 11th seed hung tough for 2-1/2 hours to seal a place in round two with a 2-6 6-3 7-5 win over the little-known Romanian.

"Both of us gave our heart on court today," a beaming Gauff told the crowd after celebrating her win by thumping her chest with a clenched fist. "Court Two is a really, really nice court and I like that it`s intimate as you can hear every gasp and every cheer and I like that. "First round is always tough for me as it`s the most nerve racking... but if I lose I know it`s not the end of the world."

The 18-year-old American is the youngest player in the singles draw and after her runner-up finish at the French Open this month, many are tipping her to go all the way at the All England Club. However, when she lost the opening seven points against Ruse, including surrendering her serve to love, her father and coach Corey could be seen frowning on a sun-soaked Court Two.

When Gauff went on to earn and lose four break points in Ruse`s opening service game, it set the tone for a frustrating afternoon for her family. The popular teenager, who captured the world`s attention when she made it to the Wimbledon fourth round as a 15-year-old school girl in 2019, finally got a foothold in the match when she broke for a 4-2 lead in the second set before levelling at one set all. The 24-year-old Ruse fought back from 3-1 down in the final set to level at 3-3 but Gauff clung on despite continuing to misfire on break points.

She needed six of them to break Ruse`s resolve in the 11th game of the decider and secured victory when her opponent whipped a forehand wide. She will next face Romanian Mihaela Buzarnescu.