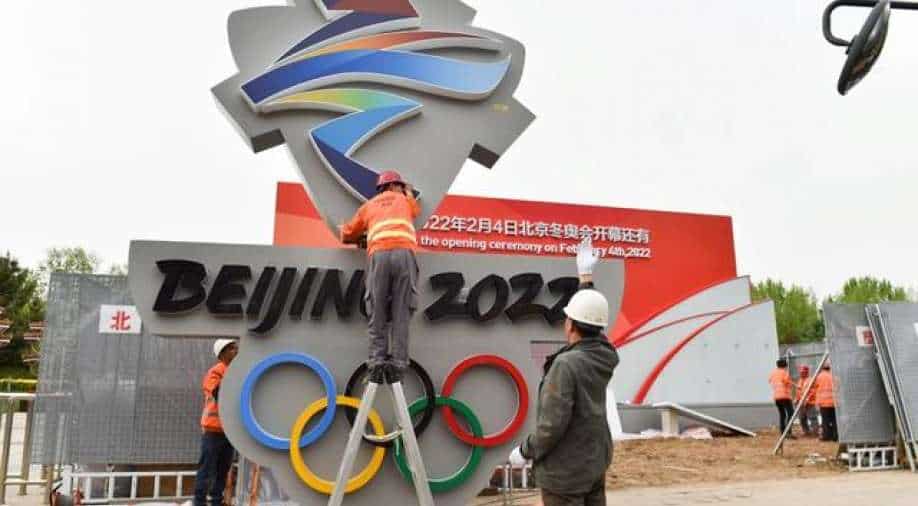 Workers install a Beijing 2022 emblem for a countdown clock to mark the number of days till the opening ceremony of the 2022 Winter Olympic Games, in Zhangjiakou, Hebei province, China May 8, 2019. Photograph:( Reuters )

Have Olympic Games been boycotted? The answer is yes. The last time this happened was in 1980. That's when the US had led a diplomatic boycott against Moscow.

The US says China has committed genocide in Xinjiang. Its human rights report says the Uighurs are on target.

More than one million of them were randomly put in jail. They were tortured, men faced forced sterilisation, women were raped, forced into getting abortions, and then forced into labour.

None of this is a secret. The world has known about all of this for a while now. The United States chose to release the report only last month. It went on to slap sanctions on China. But that may not be enough.

So, team Biden is considering another way to embarrass China. Boycotting the Winter Olympics in Beijing. They're scheduled for 2022. Will the US boycott the games?

They're considering the possibility. We got the first hint on Tuesday US State Department spokesperson  Ned Price was holding a press conference. He said Washington wants to discuss the joint boycott with allies.

He said, "It is something that we certainly wish to discuss and that it is certainly something that we understand that a coordinated approach will be not only in our interests but also in the interests of our allies and partners. So this is one of the issues that are on the agenda both now and going forward, and when we have something to announce, we will be sure to do that."

He couldn't have been clearer. The US will sound out its allies. Perhaps ask them to withdraw from the games.

The statement created quite a stir. So much so that the state department came up with a clarification. It said there has been no discussion about a joint boycott with allies.

That doesn't mean there will be no discussion in the day ahead. This is enough to raise the hackles of Beijing. It deployed Zhao Lijian to respond, the wolf warrior-in-chief.

What did he say? America is politicising the Olympics.

"If the US insists on ignoring the real truth and facts and deliberately uses lies to smear and attack China, this will certainly be doomed to fail. Not only will it damage the US’s reputation and interests, but will also definitely encounter the firm opposition of the Chinese people and a strong response from China."

Is this an overreaction? Not in the least. The call for boycotting Beijing Olympics isn't new.

They wanted the International Olympic Committee or the IOC to revoke the Winter Olympic Games from China.

Then in October, Uighur rights groups met the IOC. They shared stories of detainees.

They told the Olympic committee about human rights abuses in Xinjiang. And also what's happening in Tibet and Hong Kong

Their demand was the same: Take the Olympic Games out of Beijing.

How did the IOC respond? Not very favourably. According to one Uighur representative, their concerns were "completely dismissed".

Zumretay Arki of the World Uighur Congress says the IOC is hiding behind political neutrality. And that the committee is willing to host "genocidal Olympic games".

"When we met with the IOC in October, we asked them to listen to our voices but instead they completely dismissed our experiences and sufferings,” Arki said.

The pressure is mounting. Not just on China and the International Olympics Committee, but also the sponsors.

Companies like Visa and Coca Cola are the "Olympic partners" for this event. They're facing criticism. Another sponsor Airbnb is facing tough questions. It is being asked why it is providing lodging in a country that has concentration camps for Uighurs.

For big sponsors, this is a test of their corporate social responsibility.

But exiting won't be easy. Any boycott is sure to invite a backlash from China.

Ask H&M and Nike: they've faced a state engineered boycott in China. That's because they said they won't buy cotton from Xinjiang. Moral of the story: boycotting China won't be easy. China will fight back.

But it cannot fight everyone. So the boycott must be a joint effort. How can the world do it?

The Eurasia group - a political risk consultancy firm - has put together a report. It has listed three ways in which the world can boycott the winter games.

Number one: A diplomatic boycott.

That's something the US has hinted at. America could join at least one other major western country and boycott the games in China. The Eurasia group says this is the most likely scenario with a 60 per cent probability.

Their report says the likely participants in such a boycott could be the United States, Canada, the UK and Australia. Some European countries could join in too.

What does this mean? One or more western countries could stop their athletes from participating in the games. They could consider an economic boycott as well, with a ban on US spectators, broadcasters and sponsors. So basically, this option is about discouraging any form of participation at home. The probability of this is 30 per cent.

The final option is an outlier scenario.

This one rules out a boycott. Instead,  countries could just issue "mild political statements about the games". The Eurasia group says there is only a 10 per cent chance of this happening.

So will the Beijing Olympics be boycotted?

We'll have to wait for the answer.

Have Olympic Games been boycotted? The answer is yes. The last time this happened was in 1980. That's when the US had led a diplomatic boycott against Moscow.

This was over the Soviet invasion of Afghanistan in 1979. A total of 65 countries had refused to participate in the games.

Today, if America chooses to take a stand against China and withdraws its athletes from the winter games,  there's a good chance that more nations will follow suit.

For China, the trend would be hard to miss.

What is China doing about all of this?

Xinjiang produces 20% of the world's cotton.

China cannot afford a boycott. So it has launched a propaganda campaign.

It involves fashion shows and musicals. Videos of Uighurs singing, dancing and falling in love. The idea is to show that everything is normal in Xinjiang.

The question is, who is believing China?

How far can you go to win a narrative war?

When it comes to China, the country knows no limits.

Here's an example. Most of you already know what's happening in this part of the world.

Xinjiang is the home to Uighur Muslims. They are an ethnic minority that China has waged a war on. One million Uighurs have been put in concentration camps.

What happens behind these walls can be summed up as: Forced organ transplants, rape, sterilisation, forced conversions, and medical experiments.

China is guilty of orchestrating a genocide. Beijing will never accept it. China is also guilty of forced labour. Uighurs have been forced to work in the cotton fields of Xinjiang. Recently, the EU, Britain and Canada imposed sanction on Chinese officials.

China pushed back hard. It began punishing businesses that raised questions on Xinjiang. International brands like Nike, H&M, Adidas were taken off Chinese e-commerce apps. They were also removed from maps.

Chief designer of Sun-bird, Zhou Li said: "As a Chinese designer, of course, my support for Xinjiang cotton is correct. For me, I think Xinjiang cotton is my sweetheart, my lover. This time I want to thank him. He brought me so much joy."

Too much drama? Watch this footage.

This is China trying to portray Xinjiang as a happy place. You know, where Uighurs sing, dance, fall in love. The Chinese Communist Party has sponsored a musical called the Wings of Songs. It paints a Utopian picture of Xinjiang. This is the latest addition to China's propaganda campaign.

Like you just saw, the campaign has turned into a comedy.

Guess what? There's more. Chinese TV stations have been blurring out logos of western brands. The result looks like this: People floating on clouds. People whose bodies have disappeared.

We told you, China can go far in a bid to win a narrative war. It's another story that China's bluff was called out long back.

And with all the drama, the dragon is now only making a spectacle of itself.