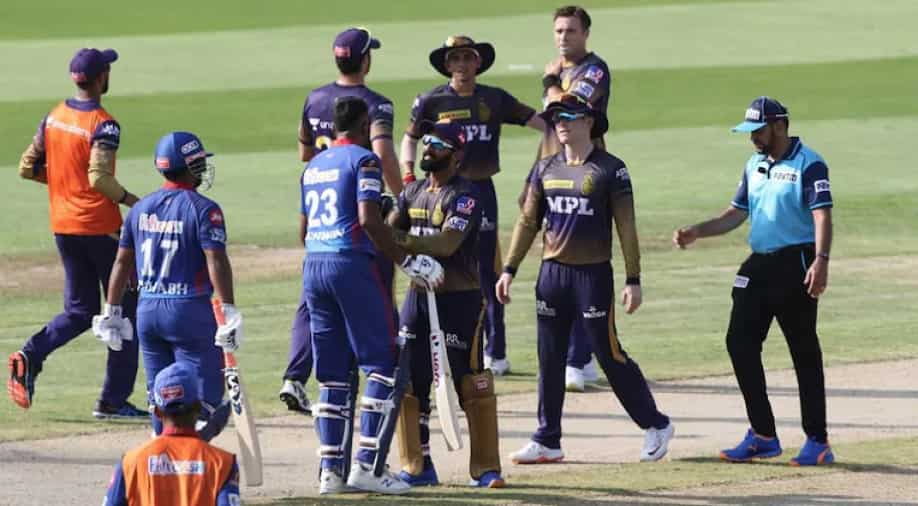 KKR vs DC Qualifier 2 Photograph:( Others )

Former India captain and batting legend Sunil Gavaskar feels Delhi Capitals (DC) skipper Rishabh Pant could have intervened and tried to defuse the situation after R Ashwin and Eoin Morgan got involved in an ugly spat during the clash between KKR and DC in IPL 2021.

Delhi Capitals (DC) spinner R Ashwin was involved in an ugly spat with Kolkata Knight Riders (KKR) skipper Eoin Morgan and pace Tim Southee in the clash between the two sides in IPL 2021 last week. The heated argument took place after Ashwin ran an extra run in the game when the ball deflected after a throw hit Pant, who was batting in the middle with the spinner.

Ashwin running for an extra un off the deflection did not go down well with KKR players as Morgan and Southee both had a heated exchange with Ashwin after the spinner was dismissed in the final over of DC's innings. The spat between Ashwin and Morgan took an ugly turn after the KKR captain termed Ashwin's act of taking the extra run 'disgraceful', igniting the 'spirit of cricket debate' once again.

While several former cricketers backed Ashwin as he was within the rules to take the extra run, some slammed the Delhi Capitals spinner for his action. Ashwin himself had shared a long thread on Twitter, lashing out at Morgan and Southee while explaining his side of the story. Now, batting legend Gavaskar has shared his views on the incident and said it is unfair to blame Ashwin. The former India captain questioned why nobody is asking Pant why did he take the run when the ball had hit him.

"What nobody asked is, why did Pant run? He was the one who was struck by the ball and if at all anybody should have known that the tradition is not to take the run after the ball is deflected, then it was the Delhi skipper. Maybe, in the heat of the battle and the anxiety to add runs to the team’s total, he took that extra run," Gavaskar wrote in his column for Mid-Day.

Gavaskar further stated that Pant could have stepped in at the time and tried to defuse the situation when Morgan and Ashwin were having a go at each other. However, the batting legend insisted that it is not easy to control emotions when playing in the scorching heat of the UAE.

"But why blame Ashwin? He may not have even seen the ball hitting his skipper as he would be intent on getting to his end and may have only seen the ball that was away from a fielder and so responded for the extra run. Pant could have stepped in and defused the situation, but in the intensity of the battle and especially in the hot and humid desert atmosphere, it is extremely tough to keep a cool head, so he may have not realised what had happened," Gavaskar added.