When MS Dhoni is there, he is the captain: Faf du Plessis on CSK captaincy saga in IPL 2022 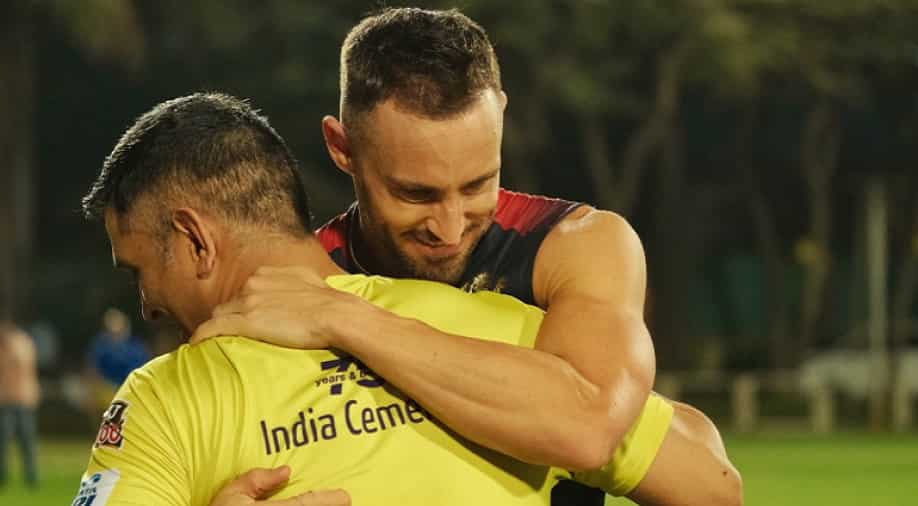 Faf du Plessis believes MS Dhoni should be leading CSK as long as he is there. | @ChennaiIPL | Photograph:( Twitter )

Former Chennai Super Kings (CSK) star and current RCB captain Faf du Plessis believes MS Dhoni should be leading CSK as long as he is in the team.

MS Dhoni returned as captain of the Chennai Super Kings (CSK) in the ongoing Indian Premier League (IPL) 2022 after star all-rounder Ravindra Jadeja decided to step down as the skipper of the side and hand over the reins back to Dhoni. Dhoni led CSK to a much-needed 13 run-win over Sunrisers Hyderabad (SRH) on his comeback as the skipper to keep the four-time champions alive in the race for the playoffs this season.

Dhoni had himself passed over the baton to Jadeja ahead of the start of the season keeping the future in mind. However, Jadeja decided to quit captaincy as CSK endured a horrible start to the season with just two wins and six defeats in their first eight matches. The pressure of captaincy had also started affecting Jadeja's game adversely.

Reacting to the captaincy saga at CSK this season, former CSK star Faf du Plessis, who is leading the Royal Challengers Bangalore (RCb) this season, said Dhoni should be the captain at CSK as long as he is in the team. Du Plessis said he was surprised when the change in captaincy happened mid-season but insisted the move was in the making.

"I'm surprised that the captaincy change happened midseason, but I was also surprised at the way it happened the way before the season. So, it is like two surprises cancelling each other out. Obviously, there's no secret that when MS is there and he is the captain, he does get the best out of the players, and that has been a big part of CSK's success," Du Plessis said in a video shared by RCB ahead of their clash against Dhoni's CSK in IPL 2022 on Wednesday (April 04).

CSK returned to winning ways in Dhoni's first game as captain after the four-time champions successfully defended the total of 202 runs against SRH at the MCA Stadum in Pune. CSK are in a must-win situation in every game from here on as they look to keep their playoffs hopes alive.

CSK will be looking to continue their winning run when they take on RCB at the same venue on Wednesday. While CSK are currently placed ninth on the points table with six points from nine games, RCB are at the sixth spot with ten points from as many matches.