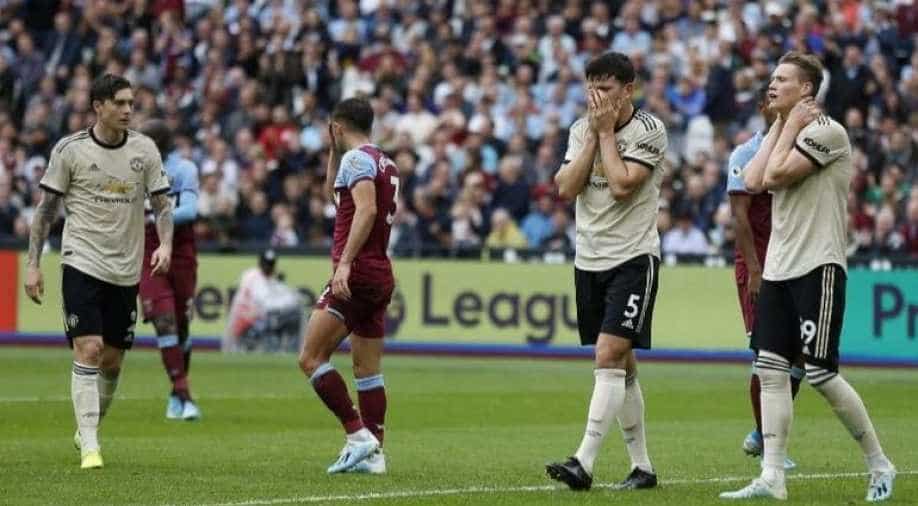 West Ham inflicted more away-day pain on a poor Manchester United side on Sunday, lifting themselves to fourth in the Premier League with a comfortable 2-0 win at the London Stadium.

United, who started the season by thumping Chelsea 4-0, have lost twice already in their opening six league games and lie seventh, without an away win in any competition since March.

Injury-hit United were without midfielder Paul Pogba and forward Anthony Martial and huffed and puffed but failed to break down their dogged opponents.

West Ham are riding high under Manuel Pellegrini, unbeaten since a 5-0 drubbing in the first match of the season and this victory followed a home win last season against United at the London Stadium.

But it was a chastening day for Ole Gunnar Solskjaer's men, just a day after champions Manchester City came close to matching United's Premier League record for margin of victory -- 9-0 against Ipswich in 1995.

Solskjaer played the same side that triumphed against Leicester last week while Pablo Fornals came in for the injured Manuel Lanzini for the home side.

Both sides were cagey at the start of the match, with neither side able to create clear-cut chances.

West Ham looked the more inventive team when they broke forward while United looked ponderous in attack and lacking in ideas, with Marcus Rashford isolated up front.

The match was drifting towards the interval before Felipe Anderson and Yarmolenko combined to sap United's confidence with a goal in the 44th minute.

United went close to an equaliser early in the second half as the rain came down in London, with Juan Mata missing from close range after an Andreas Pereira cross.

Already short of options up front and missing creators in midfield, they lost Rashford just before the hour mark, replaced by the out-of-form Jesse Lingard.

West Ham went close to doubling their lead shortly afterwards but David de Gea got down low to keep out an Anderson shot from a tight angle.

United upped the pressure and West Ham had goalkeeper Lukasz Fabianski to thank for keeping out a Harry Maguire strike from close range.

But West Ham continued to look more dangerous on the break and made United pay when Ashley Young brought down Mark Noble on the edge of the penalty area.

De Gea was a bystander as Cresswell curled a free-kick into the top right-hand corner to add to United's pain.