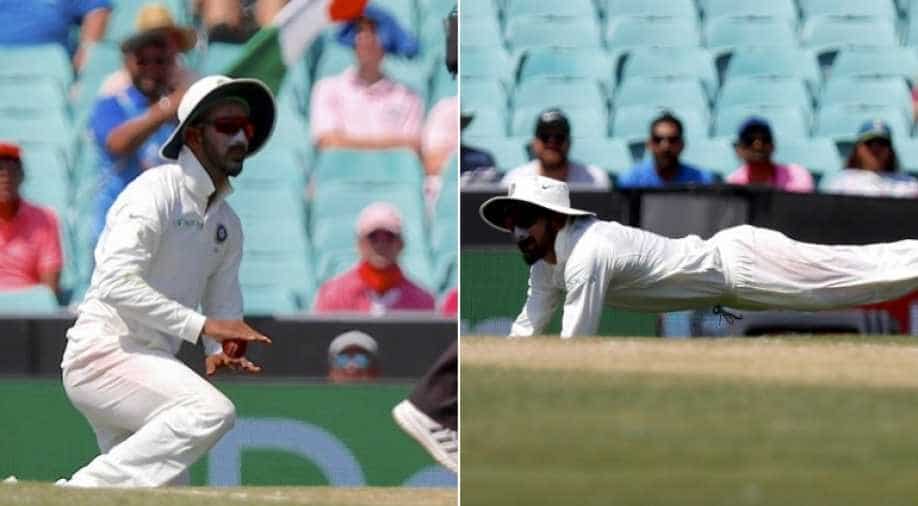 On-field umpire Ian Gould appreciated Rahul's honest act and gave him a thumbs up when other players started celebrating the wicket.

Indian batsman KL Rahul won hearts by his act of honesty while fielding on the third day of fourth and final Test of India-Australia series at Sydney Cricket Ground.

The incident happened when Australian batsman Marcus Harris survived a close call batting on 24 when a diving KL Rahul narrowly missed a catch.

Rahul immediately signalled that it didn't carry and was bounced. He ensured that the umpires don't waste time going to the third umpire.

On-field umpire Ian Gould appreciated Rahul's honest act and gave him a thumbs up when other players started celebrating the wicket.

Opener Harris quickly found a groove with some crisp shots and went on to score 79 off 120.

A good effort from Rahul and he immediately says it bounced. Great stuff. Umpire Gould a big fan of it #CloseMatters#AUSvIND | @GilletteAU pic.twitter.com/7nA0H5Lsc7

This looked out for all money, but brilliant honesty from KL Rahul to not hesitate in ruling it out.

Australia were left struggling at 236 for a loss of six wickets in their first innings in reply to India's colossal score of 622-7 when bad light stopped the play and early stumps on third day.

When the players walked off the field, Peter Handscomb and Pat Cummins were batting on 28 and 25, respectively, as Australia trailed India's first-innings total by 386 runs.

Unless Australia win, India will claim a first-ever series victory Down Under since they began touring here in 1947-48.