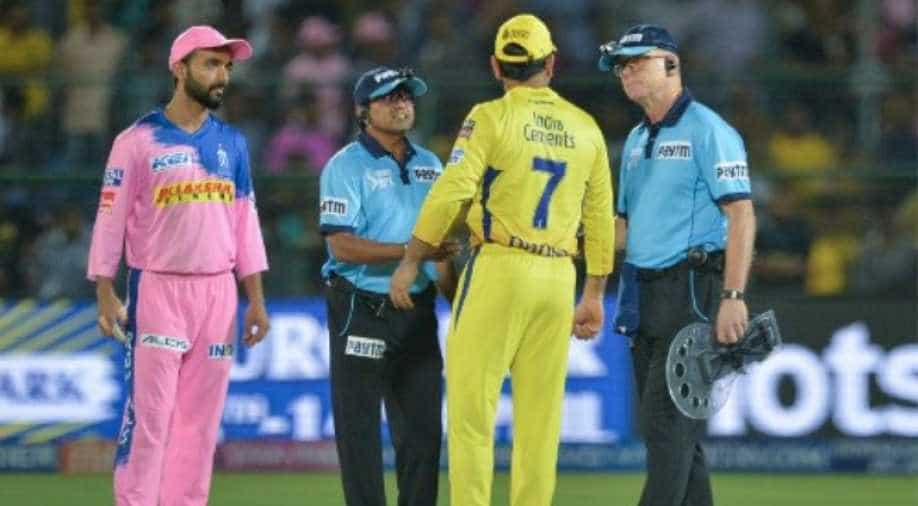 Chennai's skipper MS Dhoni was seen extremely angry at the umpires in the last over while chasing 152-run target against Ajinkya Rahane-led Rajasthan team during an Indian Premier League match on Thursday.

The confusion emerged when the umpire, for a moment, indicated a no-ball but the leg-umpire said he never signalled for it.

Ravindra Jadeja and Mitchell Santner started questioning the on-field umpires and amid that, Dhoni walked onto the ground to talk to the umpires.

Umpires, however, denied it and eventually signalled it as a legitimate delivery.

In the TV replays, the ball was found to be a slower full toss, which appeared to be above the waist of Santner.

Dhoni was seen shouting 'No ball' from the dug-out as Ravindra Jadeja was seen arguing with the umpire. To everyone's horror, an angry Dhoni entered the field of play, which certainly isn't allowed as per rule and took the umpire head-on.

He was seen angrily gesturing at the umpire before leg umpire Chris Gaffaney asked Dhoni to leave the field of play.

A lot had happened in Ben Stokes' last over that changed the course of the game. The first ball went for a sixer, and second, went for a no ball.

The third was an inch-perfect yorker that took Dhoni's wicket and the fourth ball brought all the confusion in which Dhoni lost his cool and came storming onto the field.

The fifth ball was wise but it gave two runs and the last ball was wide and on the final ball, Santner hit the winning runs with a beautiful six.

In the match, Chennai defeated Rajasthan to regain top spot on the points table.