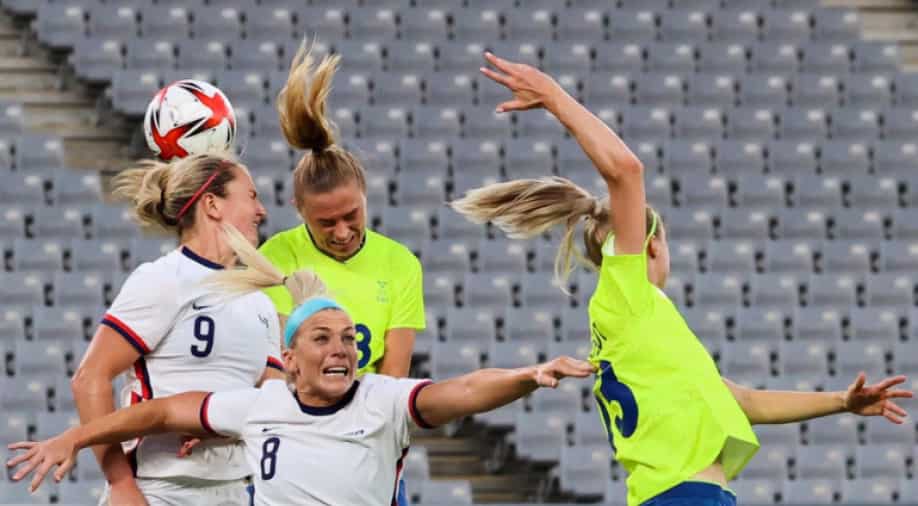 The US have won four of six Olympic titles since women's football was introduced to the programme in 1996 and are Gold medal favourites this year as well.

Gold medal favourites the United States began their bid for a fifth women's Olympic football title with an embarrassing 3-0 loss to Sweden, while Team GB kicked off their campaign at the Tokyo Games by beating Chile on Wednesday and the Netherlands put 10 past fellow debutants Zambia.

The US have won four of six Olympic titles since women's football was introduced to the programme in 1996 but suffered a heavy defeat by the same team that knocked them out on penalties in the quarter-finals in Rio.

Stina Blackstenius scored twice before substitute Lina Hurtig added a third for 2016 silver medallists Sweden at a game played in an empty Tokyo Stadium due to strict Covid-19 restrictions.

The loss ended a 44-match unbeaten run for the Americans dating back to the start of 2019. It was also only the second time they had lost a game in 90 minutes at the Olympics.

"They're (Sweden) one of the best teams in the world," said US forward Megan Rapinoe. "There's really no time to dwell or think about if Sweden is living in our heads or not. We've got another game in three days."

The Dutch made history in Miyagi as Arsenal striker Vivianne Miedama scored four times in a remarkable 10-3 thumping of Zambia.

It was the highest-scoring game in women's Olympic history and the most scored by one team in a match, but Zambia avoided a record margin of defeat as Barbra Banda scored twice late on to secure a hat-trick.

The largest win remains Germany's 8-0 thrashing of China in 2004.

In Sapporo, Great Britain won their Group E opener 2-0, with Manchester City striker Ellen White scoring twice and having a goal disallowed by VAR for offside.

Hege Riise's side are bidding to become the first British team to win an Olympic football medal.

"When you get into a competition, it's really important you win that first game," said Team GB captain Steph Houghton.

"There's still a lot of stuff to improve on but three points on the board, we're really pleased."

Brazil star Marta bagged two goals in a 5-0 rout of China in Group F, meaning she has now scored in five straight Olympics.

Debinha scored in between Marta's brace before a late Andressa penalty and Beatriz strike completed a comprehensive victory in Rifu.

In the other Group E game, hosts Japan rescued a 1-1 draw with Canada as Aston Villa's Mana Iwabuchi scored an 84th-minute equaliser.

Christine Sinclair had put the Canadians in front, marking her 300th appearance for her country with a record-extending 187th international goal.

Australia sit second in the early Group D table behind Sweden after Sam Kerr found the net in a 2-1 victory over New Zealand.

England's cricket tour of Bangladesh for September-October postponed until 2023

Cricket: 'There are a few more years ahead of me,' says AB de Villiers on IPL future