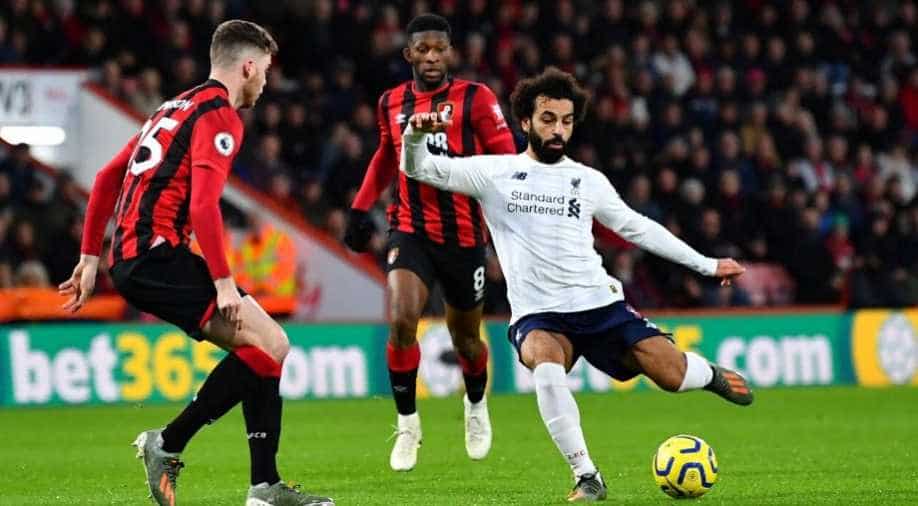 Defending champions City came into the match at the Etihad Stadium knowing they had to win after Jurgen Klopp's men coasted to a 3-0 victory on England's south coast but they succumbed to United's lightning-quick attacks, losing 2-1.

City's fourth league defeat of the season leaves them 14 points behind Liverpool, who have won 15 of their 16 league games. No side has ever gone on to win the title after being as many points behind the top side at the end of a day.

But the match was overshadowed by unsavoury incidents, with United midfielder Fred hit by objects thrown from the crowd and footage on social media appearing to show a City fan making monkey chants.

Ole Gunnar Solskjaer's United started the evening match buoyed by their victory against Spurs in midweek and were immediately on the front foot, pouring forward at frightening pace.

Marcus Rashford opened the scoring from the penalty spot in the 23rd minute and Anthony Martial doubled the visitors' lead six minutes later.

City came back strongly and eventually their pressure paid off, with Nicolas Otamendi's late header sparking a frantic wave of City attacks but they failed to find an equaliser and United moved up to fifth in the table.

"We'll remember this one. We look so dangerous when we get the ball and go forward against arguably the best team in the world," Solskjaer told the BBC.

"They are an unbelievable team and to get a result and defend like we did and create as many chances... we should have been three or four up but for some good goalkeeping."

A disappointed Pep Guardiola, whose side remained in third spot, said it was "not time" to think about the title race.

"We have to think about what we have to do and think about the next game," he told Sky Sports. "Doesn't matter if six, eight or 14 points we have to continue. We are a fantastic team."

City said in a swiftly issued statement that they were aware of the allegedly racist video circulating on social media and of objects being thrown and were working with the police.

Klopp's team earlier widened the gulf at the top of the table to 11 points, with second-placed Leicester not in action until Sunday, meaning Liverpool cannot be caught by December 25.

Klopp, mindful of a fixture pile-up for his side, made seven changes from the 5-2 midweek victory against Everton as they chase their first top-flight domestic title for 30 years.

Alex Oxlade-Chamberlain opened the scoring for the European champions and Liverpool made it 2-0 just before the break when Naby Keita played a fine one-two with Mohamed Salah and finished from close range, with Keita turning provider for Salah in the 54th minute.

It was Liverpool's first clean sheet in any match since late September.

"Yes, it was (perfect), 100 per cent," said the manager. "We scored wonderful goals, we had more chances and did really well and we were really uncomfortable to play against.

"From 3-0 on we controlled the game absolutely. The players didn't like it too much, they wanted to be really loud in these moments but I didn't want to see any unnecessary risk."

- Son stunner for Spurs -
Spurs flew out of the blocks at the Tottenham Hotspur Stadium.

Harry Kane scored twice and there were also goals for Lucas Moura and Moussa Sissoko but it was Son's goal that caught the eye.

With Spurs already 2-0 up, Son stole the show just after the half-hour, running from deep inside his own half past a host of Burnley defenders and capping the astonishing burst with an ice-cool finish.

Everton made it three defeats in four Premier League games for Chelsea thanks to an early strike from Brazil forward Richarlison and two goals from England under-21 international Dominic Calvert-Lewin.

Former Everton player Duncan Ferguson was in charge of the Toffees for the first time as interim boss after the sacking of Marco Silva.

Watford, who appointed former Leicester boss Nigel Pearson as their new manager on Friday, were unable to force their second win of the season, drawing 0-0 with Crystal Palace.