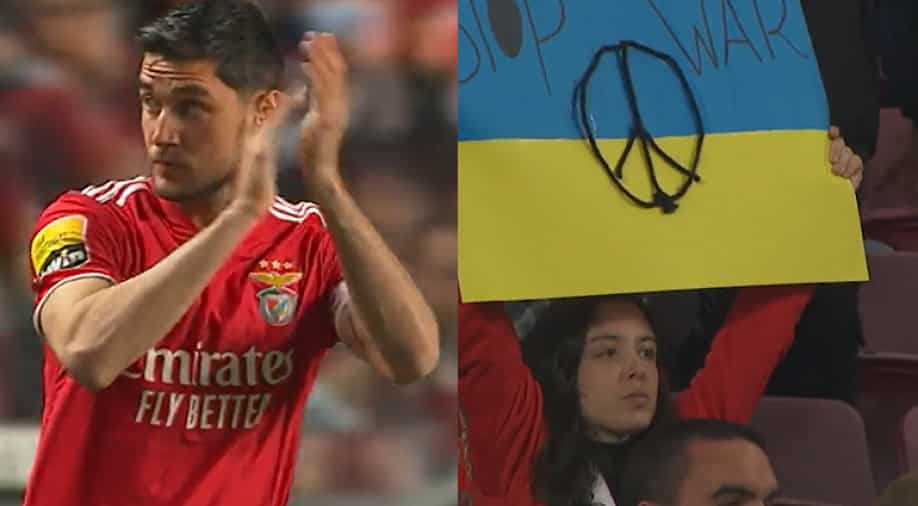 Ukrainian footballer Roman Yaremchuk couldn't control his tears after an emotional reception from Benfica fans during his side's clash against Vitoria SC.in the Primeira Liga.

Ukraine striker Roman Yaremchuk, who plays for Benfica in the Primeira Liga in Portugal, was moved to tears after a brilliant gesture from the fans during his side's clash against Vitoria SC on Sunday. The Ukrainian footballer was not named in the starting XI but came on as a substitute for his side in the 62nd minute.

As Yaremchuk prepared to take the field against Vitoria SC, he was also handed over the captain's armband by defender Jan Vertonghen. The Benfica fans gave in a standing ovation as the Ukrainian striker entered the pitch. The fans applauded him as a gesture of solidarity with Ukraine and its people amid the country's ongoing war with Russia.

Yaremchuk was moved to tears after receiving huge applause from the fans of the Portuguese club. The video of the emotional moment was shared by Benfica on social media and it instantly went viral as football fans across the world sent their wishes for the Ukrainian.

Benfica went on to beat Vitoria SC by 3-0 with the help of a brace from Darwin Nunez and a 23rd-minute goal from Goncalo Ramos. It was a comfortable win for the Primeira Liga giants, who are currently placed third on the points table with 54 points from 24 matches.

Also Read: How Premier League clubs united to express solidarity with Ukraine amid war with Russia

Apart from the Primeira Liga, several other football leagues around the world have shown solidarity with Ukraine in the last few days. Clubs like Everton, Manchester United and Manchester City among others in the English Premier League came up with gestures to express solidarity with the country during their matches last week.

England has also decided to boycott all their international football matches against Russia across competitions. FIFA has also condemned Russia's actions in Ukraine and has said the country will be barred from hosting matches and will have to play under the banner of "Football Union of Russia" without a national flag or an anthem.