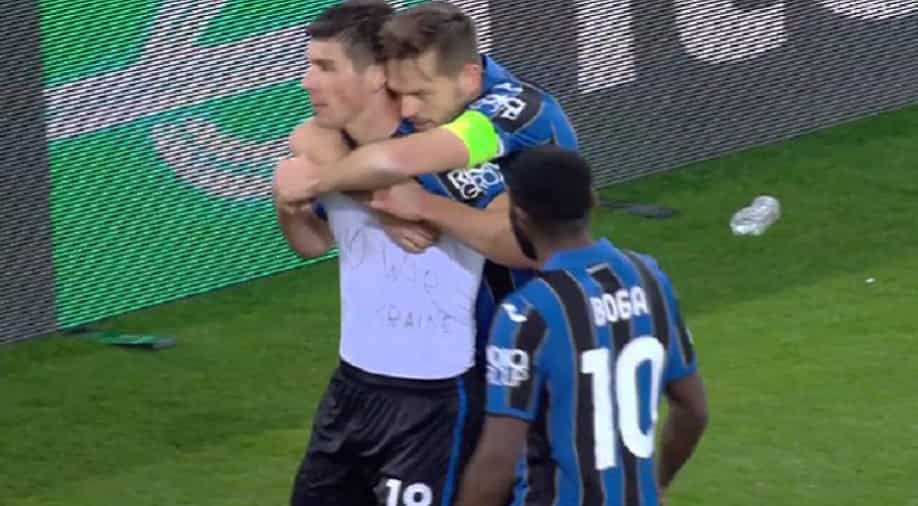 Atalanta midfielder did Ruslan Malinovskyi does 'no war' celebration after scoring in Europa League. Photograph:( Twitter )

Ukrainian footballer Ruslan Malinovskyi scored for his club Atalanta in their Europa League clash against Olympiakos and did the 'no war' celebration to send across a message.

Atalanta midfielder Ruslan Malinovskyi sent out a message for peace with his 'no war' celebration during his side's clash against Olympiakos in the Europa League on Thursday. Atalanta, who had defeated Olympiakos 2-1 in the first leg of the Europa League playoff tie, registered their second straight win against the side on Thursday in the second leg.

With the win, Atalanta have now advanced into the Round of 16 of the Europa League. Ukrainian midfielder Malinovskyi was the hero of Atalanta's win against Olympiakos as he found the back of the net twice in their clinical 3-0 win. While his goal-scoring exploits sent his side into the Round of 16, Malinovskyi also won hearts with his celebration.

As his country Ukraine battles against a full-fledged Russian invasion, Malinovskyi revealed a 'No War in Ukraine' message under his T-shirt after scoring against Olympiakos on Thursday. His celebration has been lauded by many and has gone viral across the world as millions around the globe extended their support to Ukraine amidst one of the worst military conflicts the world has witnessed in the last few years.

Russian President Vladimir Putin had earlier this week announced a 'special military operation' in Ukraine following which the Russian military entered attacked the country. As per reports, hundreds of Ukrainian soldiers have been killed in the conflict so far. Several nations including the United States and the United Kingdom have imposed sanctions on Russia.

On Friday, European football's governing body UEFA too sprung into action and stripped Russia of the hosting rights of the UEFA Champions League final. The marquee football fixture which was scheduled to be hosted by St Petersburg on May 28, has been moved to Paris.

UEFA condemned the attack on Ukraine and also pledged to support footballers who are stuck in the country and want to be rescued amid war with Russia.

“Together with the French government, Uefa will fully support multi-stakeholder efforts to ensure the provision of rescue for football players and their families in Ukraine who face dire human suffering, destruction and displacement," said UEFA in a statement.