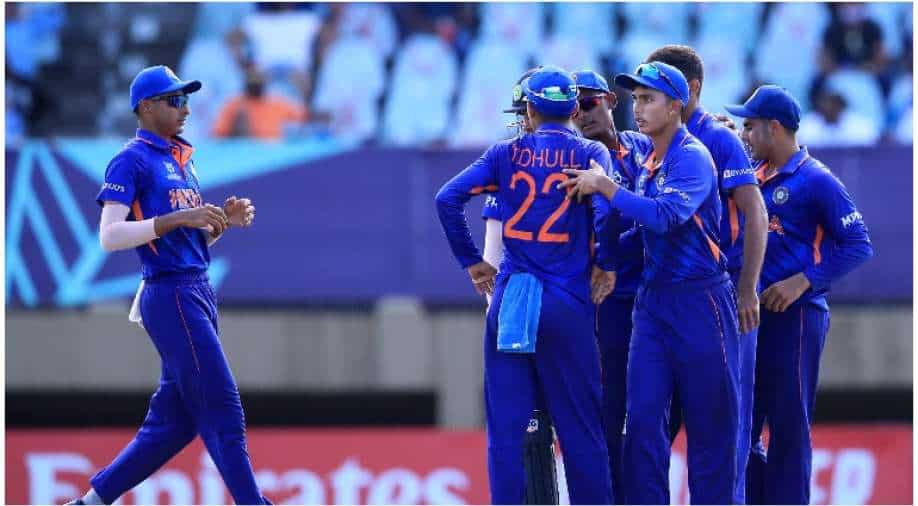 Put into bat at the Brian Lara stadium, India first rode on Harnoor Singh's brisk 88 and his opening partner Angkrish Raghuvanshi's run-a-ball 79 to post a challenging 307 for five.

Record four-time champions and title contenders India stormed into the Super League quarterfinals of the U-19 World Cup after thrashing minnows Ireland by 174 runs in a league game here, in which they barely managed to field a playing XI.

India started their campaign on a winning note, beating South Africa by 45 runs on last Saturday and the win on Wednesday by such a huge margin is significant as the team fielded only available 11 players after six members of the side were forced into isolation after testing COVID positive.

Put into bat at the Brian Lara stadium, India first rode on Harnoor Singh's brisk 88 and his opening partner Angkrish Raghuvanshi's run-a-ball 79 to post a challenging 307 for five.

The Hrishikesh Kanitkar-coached side then bundled out the opposition for 133 in 39 overs to register a comfortable win.
Skipper Yash Dhull and his deputy Sheikh Rasheed were among those isolated after testing positive as Nishant Sindhu led the side.

Left-handed Harnoor and Angriksh stitched a 164-run stand at the top to ensure Indian bowlers had a decent total to defend.
Harnoor hit 12 fours in his 101-ball knock while Angriksh found 10 boundaries and two sixes.

Stand-in skipper Nishant Sindhu (36 off 34; 5x4s) and Raj Bawa (42 off 64; 2x4s; 1x6) then shared a 64-run stand for the third wicket.
As big hits dried up towards the end, Rajvardhan Hangargekar struck five sixes, including a hat-trick of maximums in the last over, in his fiery 17-ball 39-run unbeaten cameo that took India past the 300-run mark.

Harnoor, who has been in sparkling form, drove the ball elegantly. If it was pitched up on the middle and leg, the left-hander from Jalandhar flicked it exquisitely. The ones pitched up on the off-side were driven in the cover region as Harnoor ticked the board nicely.
In contrast, Angriksh chose to muscle the ball around. He cut, pulled and also drove in an aggressive manner as none of the Ireland bowlers could trouble the Indian openers.

Harnoor pulled left-arm spinner Matthew Humphreys (1/69) over deep mid-wicket for a six to raise his half-century. It was the same bowler who trapped him leg before later. Angkrish was dismissed by spinner Jamie Forbes (1/38).

Chasing 308, Ireland were teetering at 17 for three after losing both openers Liam Doherty (7), David Vincent (8) and Jack Dickson (0) cheaply inside seven overs. Ireland never recovered from the early blows as right-arm medium pacer Garv Sangwan (2/23) sent back skipper Tim Tector (15) in the 15th over.

Wicket-keeper Joshua Cox (28 off 46 balls) tried to take the game deep, but it was too little and too late. Sangwan struck again, this time removing Cox in the 21st over as Ireland lost half of its side for 66.

Scott Macbeth (32) only delayed the inevitable before India bowled out Ireland for 133. Left-arm orthodox spinner Aneeshwar Gautam (2/11 ) and off-spinner Kaushal Tambe (2/8) cleaned up the lower middle order and tail-enders.

For India, Sangwan, Gautam and Tambe picked two wickets each while Rajvardhan Hangargekar (1/17), Ravi Kumar (1/11) and spinner Vicky Ostwal (1/22) also did their job.

India now need to have enough players for their last Group B game against Uganda on Saturday as besides Dhull and Rasheed, batter Aaradhya Yadav, Vasu Vats, Manav Parakh, and Siddharth Yadav also tested positive for the virus.

In a Group D match in Basseterre, Australia defeated Scotland by seven wickets.
Put into bat, Scotland rode on Charlie Tear (54), Thomas Mackintosh (54) and Oliver Davidson's (33) to post a respectable 236 for eight.

Australia sent Scotland in to bat first at the Conaree Cricket Centre, a decision that looked like it might backfire when Scotland's openers made a positive start with Tear and Davidson sharing 88 runs for the first wicket.