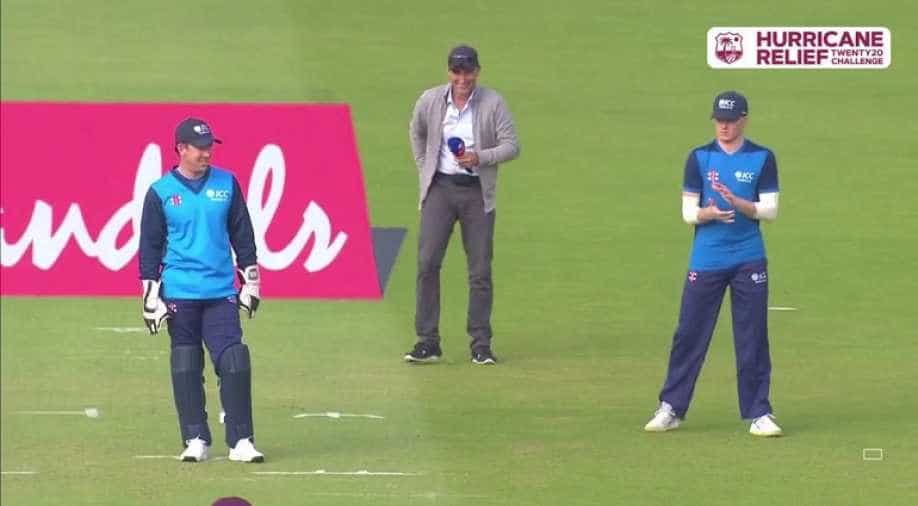 The match had many entertaining moments, from Evin Lewis' blitz to the guard of honour for Shahid Afridi. However, it was one moment for which the ICC faced a backlash from the Twitter users after it awarded the charity match an international status.

Former English cricketer Naseer Hussain live commentary, standing at first slip, didn't go down well with the viewers, leaving them wondering how seriously was the game being taken.

The picture went viral on social media with fans unimpressed with the turn of events.

Nasser Hussain as Reporter on the field in an International Game... This isn't allowed anyway #CricketRelief pic.twitter.com/vwfbwdqVDp

Nasser Hussain, on commentary, at first slip for the opening over. This is why these games - wonderful as they are - should never have international status. #WIvRoW pic.twitter.com/T3caRzOEEA

Good morning.Just turned on Facebook Live. Please tell me that's a hologram of Nasser Hussain pretending to be on the field of play and not the real thing.

Really enjoyed the #WIvWorldXI game and kudos to @SkyCricket for making their feed available for free...but i hope to your deity of choice that we never see that Nasser Hussain experiment montrosity on a cricket ground again! #shudder

@SkyCricket #WIvRestoftheWorld
Nasser Hussain wandering round the field not quite knowing what he is doing.
Nothing new there then!
Seriously is this the way forward for our “glorious summer game “?

The match was played to raise funds to rebuild cricket grounds in Anguilla and Dominica damaged by hurricanes Irma and Maria that swept through the Caribbean in September 2017.

Afridi donated USD 20,000 to hurricane relief from his foundation, while all the players donated their match fees to the charity. The Pakistan all-rounder, who retired from mainstream international cricket two years ago, received a guard of honour at Lord's.