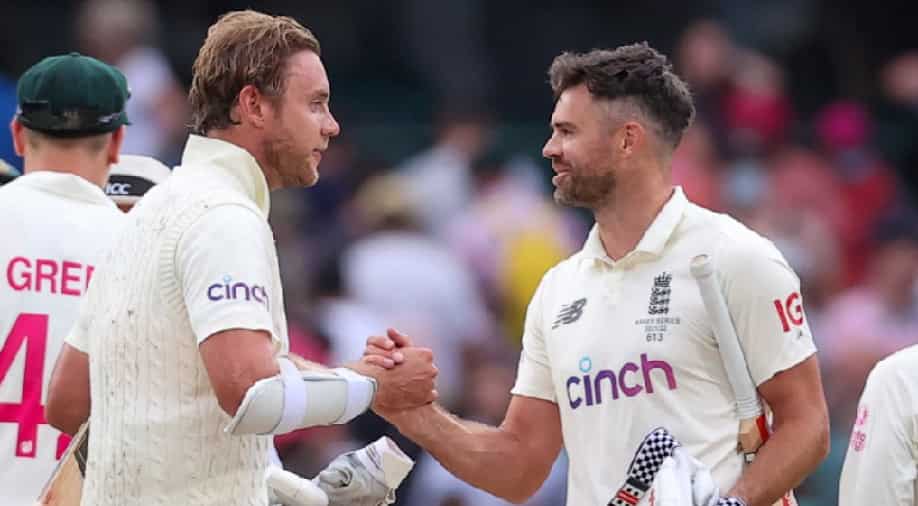 James Anderson managed to survive a dramatic final over from Steve Smith to earn England a thrilling draw in the 4th Test of the ongoing Ashes 2021-22 on Sunday (January 08).

England managed to draw the fourth Test against Australia in the ongoing Ashes 2021-22 after a thrilling finish on Day 5 at the Sydney Cricket Ground in Sydney. England's last batting pair of James Anderson and Stuart Broad survived a nervy spell of two overs together to pull off a dramatic draw for the visitors after three back-to-back losses in the first three Test matches.

England were on the verge of losing their fourth Test in a row in the ongoing Ashes series after Steve Smith removed Jack Leach in the 100th over with the Aussies needing just one wicket to win. However, Broad and Anderson managed to hang on and save the Test match for the visitors.

While Broad scored 8 off 35 balls after coming out to bat at no.10, Anderson remained unbeaten on 0 while facing the entire last over from Smith. It was a nail-biting finish to the game as fans and experts took to Twitter to hail the beauty of Test cricket. Twitter flooded with reactions as the SCG Test ended in a draw between Australia and England.

Check out some of the reactions:

What a finish in Sydney! Couldn't take my eyes off the action. I find the idea that survival is glory to be wonderfully endearing

The joys of Test cricket... No words needed.. #TheAshes

How blessed are those who 'get' Test Cricket. #Ashes pic.twitter.com/mM7LFVJ8Oy

Stuart Broad and James Anderson, two legends of the game, on their final tour of Australia, walk off and are met by Joe Root #AUSvENG #Ashes pic.twitter.com/0MQqwA7V3H

Ben Stokes was all of us watching that last over! Wow what a ride. So much to love about that match. Test cricket! #Ashes pic.twitter.com/pNvwOujjwy

It has been a woeful Ashes campaign for England so far Down Under as they have already conceded the series with three straight defeats in the first three games. However, the visitors managed to save some pride with a draw in the fourth Test, which saw Australia dominating the proceedings for the most part of the game once again.

Australia needed six wickets in the final session on Day 5 of the SCG encounter and came close to pulling off a victory but were left frustrated by Broad and Anderson. The hosts gave their all but managed to pick only five of the remaining six wickets as England held on to draw the game.

England will be hoping to and the Ashes 2021-22 on a high with a win in the fifth and final Test match of the series which gets underway from January 14 in Hobart. Australia are currently leading the five-match series 3-0.