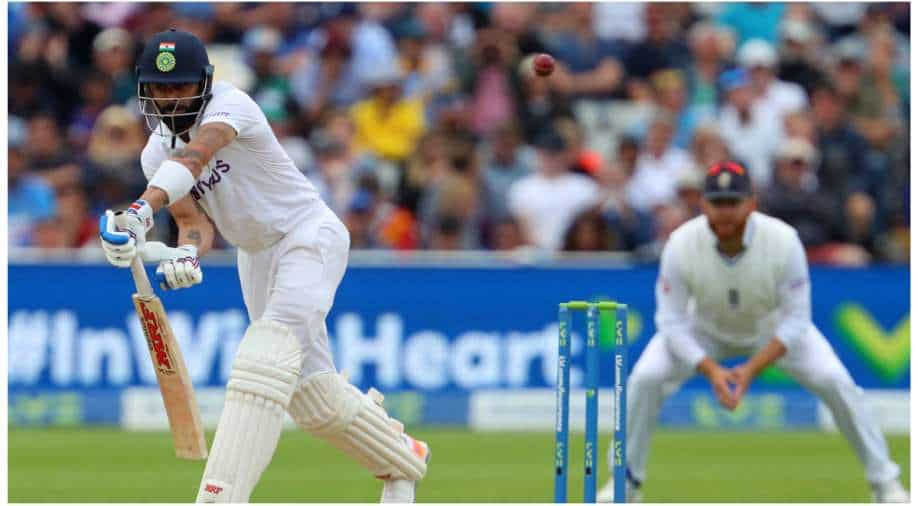 Virat Kohli came out to bat with India 43-2 after the dismissal of Shubman Gill and Hanuma Vihari. The right-hander struck four boundaries before falling to Ben Stokes, with the extra bounce doing the trick.

Virat Kohli looked in his elements when he came out to bat during Day 3 of the ongoing fifth and final Test versus England in Edgbaston, Birmingham. Despite taking a sizeable 132-run lead, India need to post a challenging total versus the Three Lions, who are now playing very aggressively with the bat since Brendon McCullum took over as the head coach in whites.

Kohli came out to bat with India 43-2 after the dismissal of Shubman Gill and Hanuma Vihari. The right-hander struck four boundaries before falling to Ben Stokes, with the extra bounce doing the trick. He got a thick edge which ricocheted off the keeper's gloves for Joe Root, at first slip, to complete the catch. Thus, Kohli's lean patch continues whereas his century-drought also extended further.

ALSO READ | 'We won't be shutting up...' - Jonny Bairstow opens up on verbal duel with Virat Kohli in Edgbaston Test

Talking about Kohli's dismissal on his YouTube channel, Pakistan's Butt sympathised with the talismanic batter of the Asian giants and said, "Whenever Virat Kohli seems to be playing well, he gets an unplayable ball. He looked confident today (Sunday) and was batting well. To score big runs, you need some luck. No one else got the kind of unplayable ball that Virat did. There is nothing that Kohli or any other batter could do about that ball."

Butt also opened up on the ongoing fifth and final Test between and India and England. Despite India being ahead, they will still aim to setup a big total for the hosts, seeing their revamped batting style in recent times. Stokes-led England have chased down 275-run totals thrice, on the trot, versus New Zealand before the India one-off Test. However, Butt feels Indian bowling is superior than the Kiwis and they should dictate terms further in the contest. “India’s fast bowlers are superior to that of New Zealand’s. India have variety. They have seamers who can move the ball off the deck. (Mohammad) Shami and (Jasprit) Bumrah can do that, (Mohammed) Siraj hits the deck hard. They bowl nagging line and lengths with aggression. Shardul Thakur is a medium pacer, who can swing the ball,” Butt added.

For the unversed, India lead the five-match series 2-1 and are aiming for their first-ever red-ball series win on English soil since 2007. The series was part of 2021 but the final Test got rescheduled due to Covid crisis in the Indian camp last year.