'The problem in that first game...': Michael Atherton explains what helped Virat Kohli roar back to form 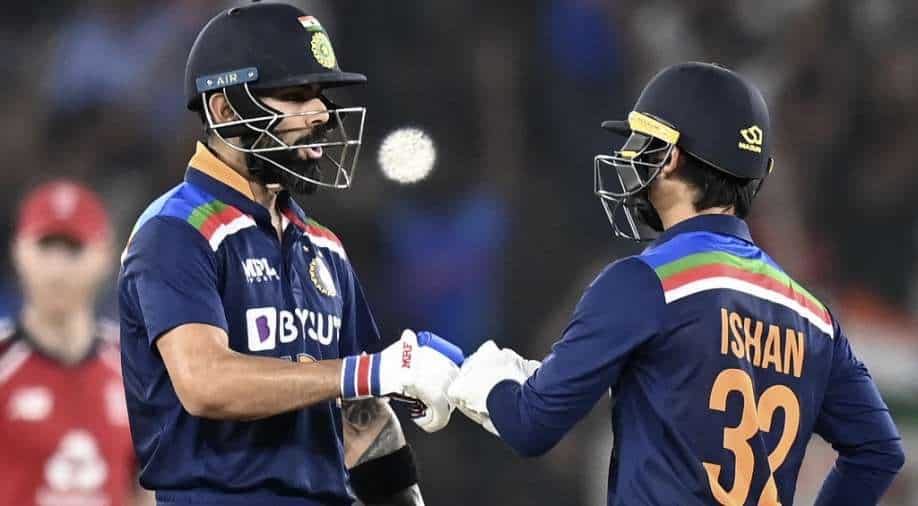 'The problem in that first game...': Michael Atherton explains what helped Virat Kohli roar back to form Photograph:( AFP )

Former England cricketer Michael Atherton has analysed what helped Virat Kohli roar back into form during the second T20I against England at the Narendra Modi Stadium in Ahmedabad where the Indian skipper scored an unbeaten 73 off 49 deliveries to help India equalise the five-match series 1-1 on Sunday.

Former England cricketer Michael Atherton has analysed what helped Virat Kohli roar back into form during the second T20I against England at the Narendra Modi Stadium in Ahmedabad where the Indian skipper scored an unbeaten 73 off 49 deliveries to help India equalise the five-match series 1-1 on Sunday.

Kohli was dismissed for a duck in the first T20I and fans and pundits had started to worry about Indian skipper's dip in form. However, the swashbuckling batsman looked at his best as he hammered the England bowlers all over the park to seal a comprehensive win for the hosts.

Atherton reckons Kohli was helped out by the debutant Ishan Kishan, who smashed 56 runs off 32 deliveries to lay the platform for India. The former England cricketer said that Ishan's blistering knock took the pressure off Kohli and helped him play his natural game.

"I think Virat felt under a little bit of pressure in that first game because of what he'd said in the press conference about India playing a slightly more aggressive game," the former England skipper told Sky Sports.

"The problem in that first game, with the line-up that India had was that they had quite a lot of similar players in the top-order and I think Kohli felt pressured. 'I've talked the talk, let's walk it now' and it's not really his game.

"He's (Kohli) an elite player and scores very quickly but not like a (Rishabh) Pant or, indeed, an Ishan Kishan. So when that young man came in and played the way that he did, I think that just allowed Kohli to come in and play his natural game," he added.

"He's not playing the type of shot he got out to the other day, where he is backing away and trying to manufacture something. He's just playing a more orthodox type of innings for him, even though he's still striking quickly and getting those fast hands through the ball in those leg-side shots that he plays so well," he said.

"I definitely felt this was a more Kohli-like performance than in the first game," Atherton signed off.

Kohli, after the seven-wicket win in the second T20I against England, lauded Ishan's fearless knock as he said he is a calculated character and is not restless.

“I tried to do what I can but he kept following his instincts and it was a quality innings on debut. When you play in the IPL with such dominance like he has and he is a fearless character and he knew that he was hitting the ball well and he is very calculated and not restless. Today that counterattacking innings from him and that partnership was needed. I had to shift the focus back to the basics of the game and I always take pride in doing the job for the team,” Kohli said in the post-match presentation to the host broadcasters.

India will look to take a lead in the five-T20I series when they play England in the third T20I on Tuesday in Ahmedabad.