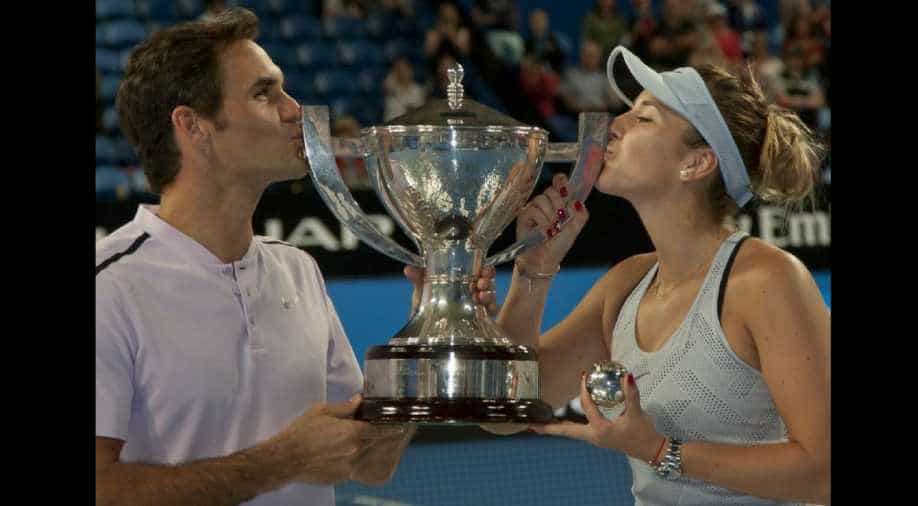 Roger Federer and Belinda Bencic of Switzerland hoist the Hopman Cup after defeating Alexander Zverev and Angelique Kerber of Germany in the mixed doubles final.

Roger Federer paid tribute to the influence of countrywoman and former Hopman Cup team-mate Martina Hingis on his career after guiding Switzerland to their third success in the mixed teams tournament in Perth on Saturday.

"I could look up to her and think, wow, how is she being so mentally strong and so consistent at such a young age," the Swiss star recalled.

Federer looked primed for his Australian Open title defence when he came from a set down to beat world number four Alexander Zverev in the men's singles before Angelique Kerber accounted for Belinda Bencic in straight sets to level the tie against Germany.

The Swiss duo then claimed the tournament with a straight-sets win in the deciding mixed doubles.

Unbeaten in his three singles matches in the tournament prior to the final, Federer dropped the first set against the 20-year-old Zverev but recovered to win in three sets, 6-7 (4/7), 6-0, 6-2.

Zverev beat Federer at the Hopman Cup last year and came out all guns blazing on Saturday in a high-intensity first set where both players produced moments of brilliance and each holding multiple breakpoints.

Federer's frustration was obvious as the set slipped away, dropping his racquet after missing an easy volley and then launching a ball towards the roof.

However, he turned the match around by approaching the net more often and using drop shots to catch Zverev napping.

The frustration changed sides of the net as the German copped a code violation for an audible obscenity after disputing the chair umpire's decision to replay one of his serves during the second set.

Zverev's serve, and resolve, was broken in the third game of the third set and fittingly it was a Federer drop shot which sealed the win.

Kerber, who is ranked 21st after starting last year at number one, then maintained her perfect singles record during the event to beat Bencic 6-4, 6-1 to level the tie.

Bencic, who was ranked seventh in the world before injuries stalled her progress, started brightly but Kerber soon took control and raced through the second set with breaks in the fourth and sixth games.

That set the scene for the mixed doubles, where Bencic produced some stunning returns on the Zverev serve and teamed superbly with Federer to claim the title with an emphatic 4-3 (5/3), 4-2 win under the Fast4 format.