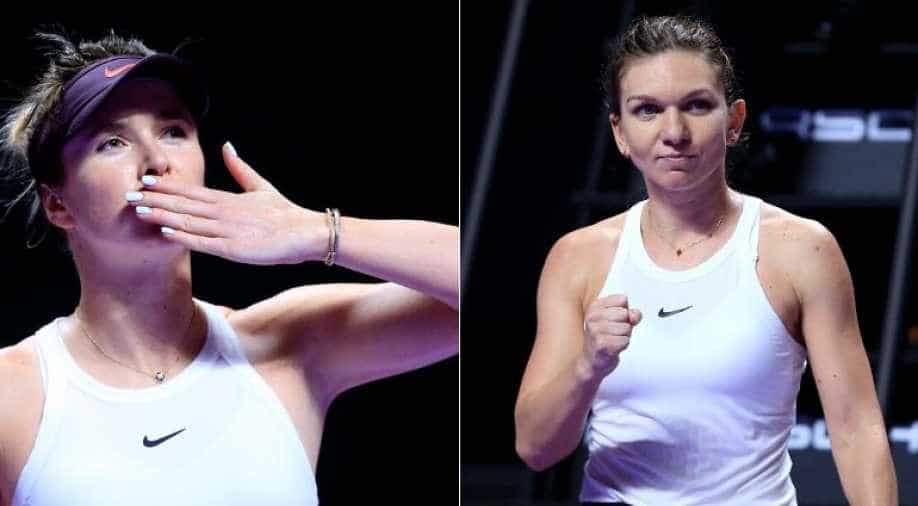 Svitolina secured a 7-6 (12) 6-4 win over the former world number one to top the standings in the Purple Group, with Halep joining her following her victory over Andreescu.

Elina Svitolina made a winning start to her WTA Finals defence in Shenzhen on Monday when the Ukrainian defeated Karolina Pliskova in straight sets while Wimbledon champion Simona Halep saved a match point to beat Bianca Andreescu.

Svitolina secured a 7-6 (12) 6-4 win over the former world number one to top the standings in the Purple Group in the round-robin phase of the competition, with Halep joining her following her victory over Andreescu.

"I was just trying to be ready for her big serves and then try to take on the second serves, I just tried to move very quickly and react quick," Svitolina said at the Shenzhen Bay Sports Center.

Svitolina conceded a break on her own serve in the opening game and was trailing but, after picking up three straight games to restore parity, she then ground her opponent down in the tiebreaker and clinched the first set.

The second set was almost as keenly fought, with Svitolina picking up the opening two games as she maintained her momentum.

Pliskova, however, won three straight games to ensure matters were back on serve before Svitolina claimed another break in the seventh when her opponent sent her attempt long from behind the baseline.

That gave the eighth seed the platform to secure her fourth straight win over Pliskova.

Later in the evening, Halep showed all her fighting qualities to come back from a set down to claim a 3-6 7-6(6) 6-3 win over U.S. Open champion Andreescu, saving a match point in the process.

Andreesca had her older opponent on the ropes throughout the first set, including forcing Halep to fight back from 0-40 down to save her own serve in the fifth game, before winning the last four games to take the lead.

Both players struggled to hold serve throughout the second set and Halep saved a match point in her final service game before forcing a tiebreaker.

Halep prevailed to send the match into a deciding set which featured five breaks of serve before the Romanian closed out the match after two hours and 34 minutes.

"It was a very tough match," said Halep. "I knew that she's a great player and that she's playing until the end, without giving up so I had to fight.

"I didn't play so much since Wimbledon so I’m a little bit dead but I have time tomorrow to recover and I'm happy I could win finally a match at the WTA Finals."