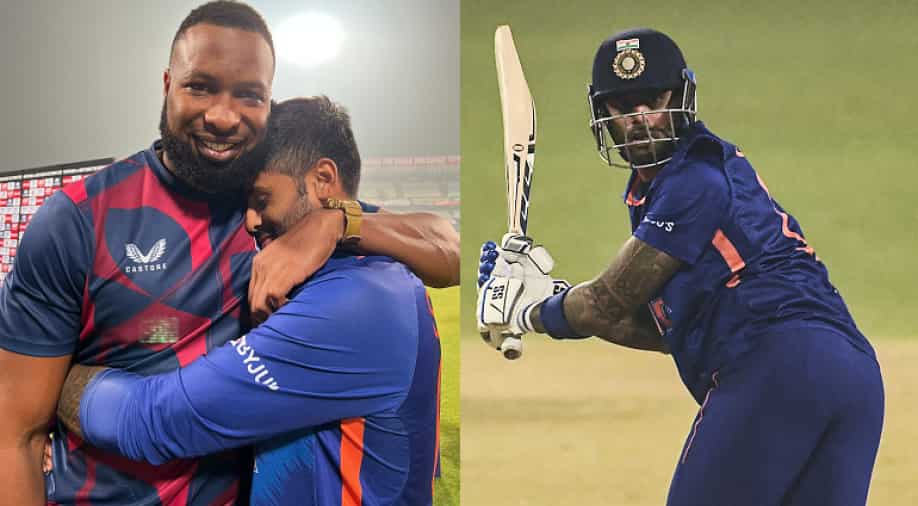 West Indies skipper Kieron Pollard lavished praise on Indian batter Suryakumar Yadav after his brilliant knock in the third T20I between the two sides on Sunday.

West Indies skipper Kieron Pollard lavished praise on Indian team star Suryakumar Yadav for his brilliant knock in the third and final T20I between the two sides at the Eden Gardens in Kolkata on Sunday (February 20). Pollard called Suryakumar a world-class player and said every batter in the world can learn something from him.

Suryakumar top-scored for India with a brilliant knock of 65 runs off 31 balls laced with seven sixes and a four in the third T20I against West Indies on Sunday. He combined with Venkatesh Iyer (35) to bail India out of trouble with a 91-run partnership for the fifth wicket.

Asked to bat first in the game, India got off to a poor start as they lost opener Ruturaj Gaikwad cheaply on 4 off 8 balls before Ishan Kishan (34) and Shreyas Iyer (25) added 53 runs for the second wicket. However, the duo departed in quick succession before skipper Rohit Sharma was also dismissed cheaply on 7 off 15 balls to leave India in a spot of bother at 93/4 inside 14 overs.

However, Suryakumar and Venkatesh steadied the ship for the hosts and staged a remarkable fightback to propel the team's total to 184/5 in 20 overs. Pollard, who shares the dressing room with Suryakumar at his IPL franchise Mumbai Indians, was all praise for the Indian batter after his heroics.

“Surya is a world-class player. I had the opportunity to play at Mumbai Indians with him since he first came in in 2011. Great to see he has grown a lot since then. He is doing great things for himself and India as a 360-degree player. All batters can take a page out of his book,” Pollard said during the virtual press conference after the match.

Also Read: Venkatesh Iyer is ahead of Pandya in race for a spot in India's T20 World Cup squad: Wasim Jaffer

While he was the top-scorer for India in the third and final T20I, Suryakumar also finished the three-match series as the highest run-getter for India with 107 runs at an average of over 53 and a strike rate close to 195. India won the third T20I against West Indies by 17 runs after successfully defending the total of 184 runs to complete a 3-0 series whitewash.

Earlier, Rohit & Co. had also completed a 3-0 whitewash against West Indies in the three-match ODI series.