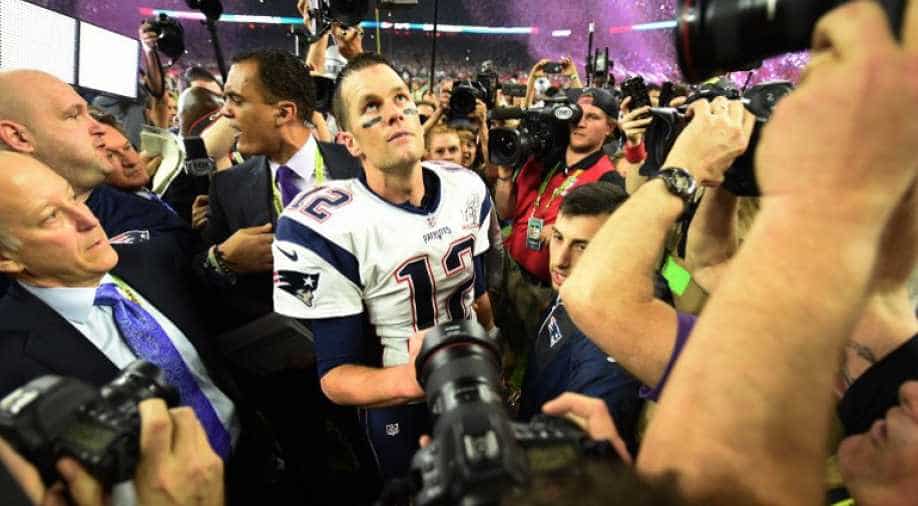 Patriots star Brady will become the first quarterback to win five Super Bowl crowns if he manages to guide his team to victory before a crowd of around 72,000 spectators at the NRG Stadium. Photograph:( AFP )

The New England Patriots stormed back from a 25-point deficit to win their fifth Super Bowl with a stunning 34-28 overtime win over the Atlanta Falcons on Sunday in the National Football League's championship game.

The New England Patriots stormed back from a 25-point deficit to win their fifth Super Bowl with a stunning 34-28 overtime win over the Atlanta Falcons on Sunday in the National Football League's championship game. (WION)

The Patriots, who seemed to have nothing go their way all night, came alive with a 19-point fourth quarter to force overtime where they put the finishing touches on their record comeback when James White scored on a two-yard run.

With the win, Tom Brady becomes the first quarterback to win five Super Bowl championships and, at 39, the second oldest at his position to win the NFL's biggest prize.

At halftime, the Atlanta Falcons came to life in the second quarter with three touchdowns to lead the stunned New England Patriots 21-3.

After a scoreless opening quarter, it was the Falcons who struck first when they turned a LeGarrette Blount fumble into a touchdown five plays later when Devonta Freeman rushed it in from five yards out early in the second quarter.

Atlanta added to their lead less than four minutes later when Matt Ryan, who on Saturday was named the NFL's Most Valuable Player, found Austin Hooper with a 19-yard pass to go ahead 14-0.

The Falcons blew the game open late in the first half when Robert Alford picked off a Tom Brady pass that he returned 82 yards for the touchdown with just over two minutes left in the half.

The Patriots got on the board when Stephen Gostkowski made a 41-yard field goal with two seconds left in the half.

The largest comeback in Super Bowl history is 10 points and the feat has been accomplished three times.

Ryan completed seven of eight passes for 115 yards while Patriots quarterback Tom Brady, who is seeking his fifth Super Bowl title, was 16-of-26 for 184 yards and an interception.

The Falcons, who entered the game as a three-point underdog, are seeking their first Super Bowl title in franchise history after losing their only previous appearance in the NFL's title game in 1999.