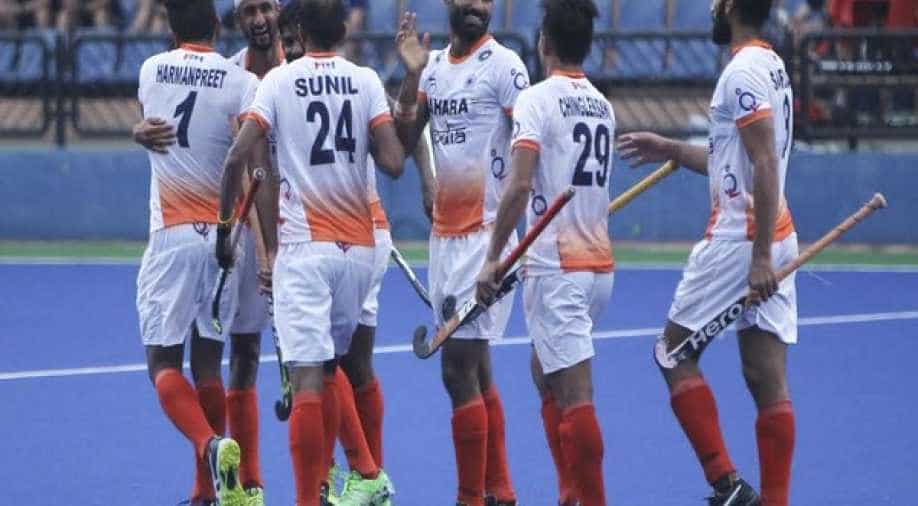 The Indian hockey team celebrates during their match against Japan. Photograph:( ANI )

It was Mandeep Singh who stole the match from Japan with an incredible hat-trick of goals to ensure the India men's hockey team a sensational 4-3 win in a nerve-gripping fourth robin-round encounter here at the 26th Sultan Azlan Shah Tournament 2017 on Wednesday.

Mandeep Singh became only the third player in the tournament after Australia's Trent Mitton and Tom Craig to score a hat-trick.

There was plenty of action in the first 15 minutes of the match with India putting Japan on the backfoot by constantly attacking them and making space in the striking circle. It was defender Rupinder Pal Singh who showed innovative dribbling skills to penetrate the circle and take a shot on goal in the initial minutes of the first quarter but he was slightly off the target with the shot going wide. But he made-up almost immediately when Talwinder Singh, playing his 50th international match today, won India their first penalty corner.

Rupinder Pal Singh improvised on the injection by Sardar Singh to fire the ball into the top left of the goal giving Japan keeper Suguro Shimmoto little chance to save. The 6th minute goal ensured India a 1-0 lead.

But Japan were quick to hit back when Masaki Ohashi set-up a goal with a square pass to Kazuma Murata who deflected the ball past India keeper Akash Chikte.

India had an opportunity to regain lead when they won a penalty corner in the dying minutes of the first quarter, but Harmanpreet Singh's flick rebounded off a Japan defender. Though Affan Yousuf found the rebound and took a shot on goal, which went wide.

After going into the first break in a 1-1 stalemate, India dominated with ball possession to keep up the pressure on Japan in the second quarter. Though a penalty corner was won by India in the 26th minute, Rupinder Pal Singh's flick went wide, denying India a 2-1 lead.

India were quick to get off the blocks in the third quarter. Defender Rupinder Pal Singh did well to assist forward SV Sunil who made space in the circle to attempt a field goal but the Japan defenders made the task tough for the experienced Sunil who couldn't make a strong enough connect to the ball.

Heita Yoshihara was the hero of the third quarter as he came up with a speedy dribble to carry the ball from the half way line, beat India defender Gurinder Singh to score a sensational goal from the far post to give Japan a 2-1 lead in the 43rd minute.

But India equalised when forward Mandeep Singh claimed a dramatic goal in the 45th minute when he touched the ball assisted by Harmanpreet Singh to deflect it into the post. But the action didn't end there with Japan reclaiming the lead with a 45th minute goal by Genki Mitani to end the third quarter at 3-2.

India won a crucial penalty corner in the 46th minute, but Japan keeper Suguro Shimmoto did well to pad away a fiercely struck dragflick by Rupinder Pal Singh.

However, India held on to their nerves, came up with good counter attacking skills and found a breakthrough when Mandeep Singh scored his second goal of the match by getting a perfect deflection of Talwinder's assist at the baseline giving India a much-needed 3-3 equaliser.

Though Mandeep won India a penalty corner after Sardar Singh's brilliance to find space in the circle, creating an opportunity Harmanpreet Singh, couldn't convert back-to-back penalty corners. It was tense final minutes with both teams keeping up the pace.

But a clincher came in the 58th minute when Mandeep Singh took a fierce reverse hit at the goal after an assist by Rupinder Pal Singh that sealed the match for India and kept their hopes alive to make the final of the 26th Sultan Azlan Shah Cup Tournament 2017.