'Stay a foot away when he is batting': Dinesh Karthik comes up with cheeky wish for Rishabh Pant on his 24th birthday 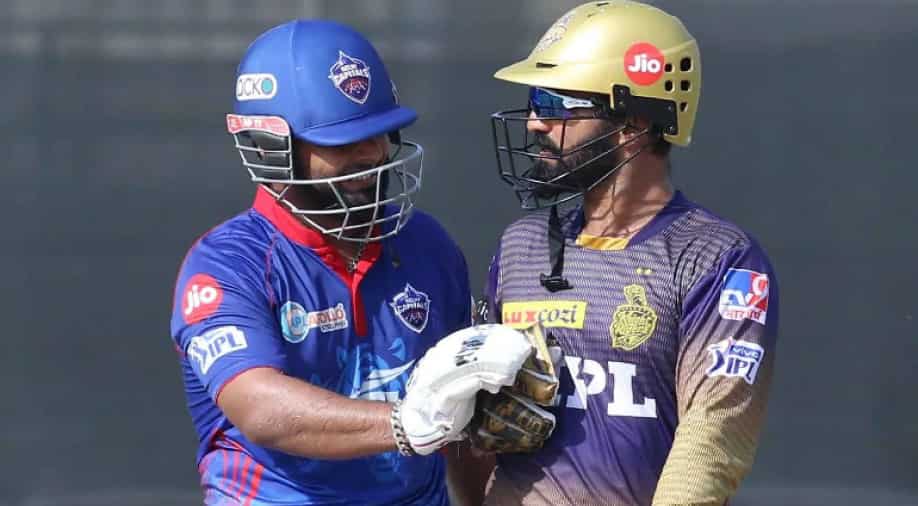 Wishes poured in from all corners as team India star Rishabh Pant turned 24 on Monday (October 04). Dinesh Karthik came up with a cheeky wish for the Delhi Capitals skipper.

Team India's star wicket-keeper batsman Rishabh Pant is celebrating his 24th birthday on Monday (October 04). The Delhi Capitals (DC) skipper has been enjoying a stellar campaign in his debut season as the captain of the franchise and has already helped them to seal a spot in the playoffs in IPL 2021. Pant's DC are currently placed second on the points table with 18 points from 12 matches so far.

Not just on the IPL front but Pant has also enjoyed a fruitful year with the Indian cricket team across formats.  From being ousted of the limited-overs formats last year to cementing his spot as the first-choice keeper-batsman across all formats, Pant has come a long way in 2021, in what has been a defining year for him.

Pant became a regular across all three formats after his impressive show in the Border-Gavaskar Trophy 2020-21 against Australia, which paved his way for a comeback in limited-overs. He has not looked back since and has been terrific as a leader of DC in IPL 2021 as well.

Wishes poured in from all corners as a number of his Indian teammates, former cricketers and other players took to Twitter to wish the 24-year-old on his birthday. KKR wicket-keeper Dinesh Karthik came up with a cheeky wish, referring to an incident between him and Pant in his side's clash against DC this season where he was almost hit by the birthday boy while collecting a ball after his miscued shot.

"Happiest birthday to the one and only @RishabhPant17. An advice to all keepers, stay a foot away from the stump when he's batting," Karthik wrote in a tweet while sharing a picture of the incident.

Pant's Delhi Capitals will be up against MS Dhoni-led Chennai Super Kings in their 13th match of IPL 2021 season on his birthday on Monday. Both teams have already qualified for the playoffs and the top spot on the points table will be on the line when they lock horns against each other. Both CSK and DC have 18 points each from 12 games so far but Dhoni's men are on the top on the basis of a superior net run rate.