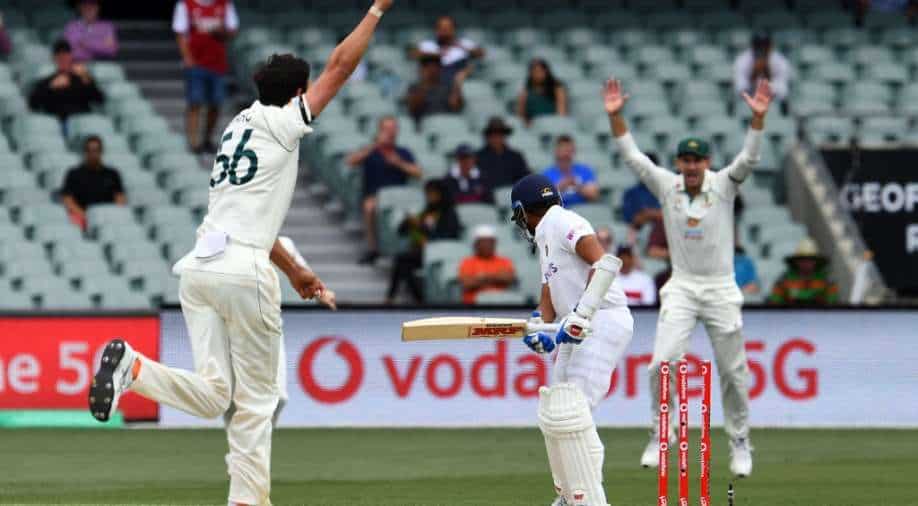 A Mitchell Starc thunderbolt gave Australia a dream start Thursday before India dug in for an intimidating opening session on the first day of their day-night Test at Adelaide Oval Thursday.

A Mitchell Starc thunderbolt gave Australia a dream start Thursday before India dug in for an intimidating opening session on the first day of their day-night Test at Adelaide Oval Thursday.

Batting after captain Virat Kohli won the toss on an overcast day, the visitors ground to 41 for two by the first break, known as dinner despite being in mid-afternoon.

Cheteshwar Pujara was not out 17 from 88 balls and Kohli unbeaten on five as they fended off a barrage from Starc, Josh Hazlewood and Pat Cummins in front of a limited, but appreciative, crowd.

Cummins, the world's number one Test bowler, was the pick of the attack with 1-3 off six overs.

Australia went into the clash with their usual three quicks, but also debutant all-rounder Cameron Green, and they got off to a spectacular start.

Opener Prithvi Shaw was clean-bowled for a duck by left-armer Starc, the world's most potent pink-ball bowler, on only the second delivery, chopping onto his stumps as he looked to drive.

It was a poor shot and will give Indian selectors plenty to ponder after preferring him to fellow 21-year-old Shubman Gill, who has been in good touch.

Starc, who only rejoined the Australian squad this week after compassionate leave, almost trapped a tentative Pujara two balls later, catching an edge that fell just short of first slip.

But the experienced Pujara, whose 123 and 71 set up India for a 31-run win in Adelaide in 2018 en route to a maiden series victory in Australia, settled down and began blocking and grinding out runs.

It proved slow going as he and Mayank Agarwal rode their luck, with Pujara surviving again when a thick edge off Starc flew past Nathan Lyon's outstretched arm.

They scored just 21 in the first 10 overs before Cummins broke the second-wicket partnership with a beautiful delivery that clattered into Agarwal's middle stump, removing him for 17.

Superstar Kohli marched onto a ground he rates as his favourite overseas to steady the ship and see his team through to dinner without further loss.