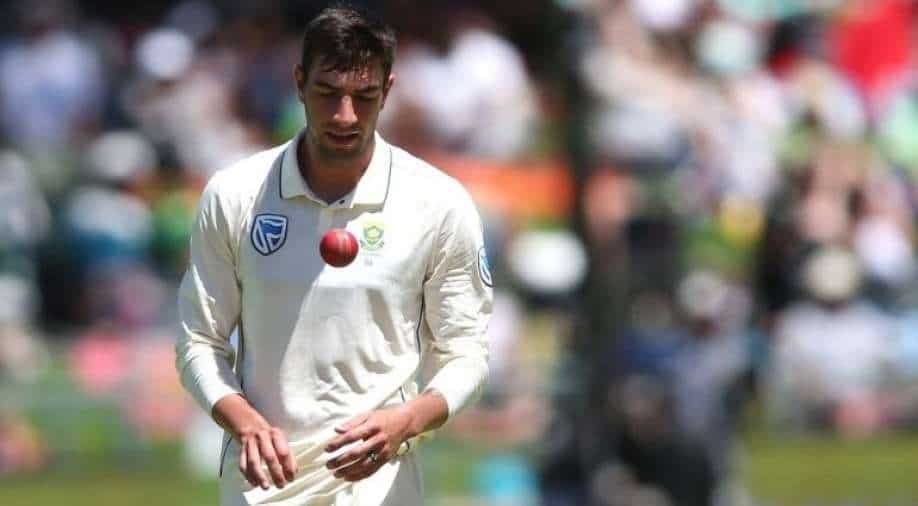 Olivier stormed into the Test scene four years ago, taking 48 wickets in 10 Tests at an average of less than 20, but then signed a Kolpak deal with English county Yorkshire, thereby halting his South African cricket career.

Fast bowler Duanne Olivier is likely to return to South Africa's line-up when the host team faces visitors India in the opening of a three-match Test series at Centurion Park beginning on Sunday in the second cycle of the ICC World Test Championship.

Olivier will reinforce a home seam attack that is missing injured Anrich Nortje and will play his first Test since 2019, after he chose county cricket in England over South Africa, despite substantial success in the five-day format.

Olivier stormed into the Test scene four years ago, taking 48 wickets in 10 Tests at an average of less than 20, but then signed a Kolpak deal with English county Yorkshire, thereby halting his South African cricket career.

ALSO READ: This is a quality Indian team: Allan Donald recalls Virat Kohli's words from 2018 ahead of Centurion Test

The series is set to be a war of pace attacks on lively wickets, particularly in the first two tests on the Highveld, and Olivier's comeback is therefore apt.

After coming home when the Kolpak system was dismantled as a result of the United Kingdom's withdrawal from the European Union, Olivier displayed exceptional form and finished the local four-day championship as the leading wicket-taker.

"I want our best opportunity to win matches and series, and in order for that to happen, you need to make tough calls, for instance bringing people back," South Africa captain Dean Elgar told reporters when asked if Olivier should be allowed to return.

"I was very keen to have him back, I’m happy and excited knowing what he can do on the field. There's no bad feelings about what's happened in the past."

South Africa has often relied on fast bowlers on hot home pitches to win, but they are also aware that India has built a powerful pace attack that has earned them international success in recent years.

"India has been an immensely improved bowling lineup, especially playing away from home. We`re very mindful of what we`re going to be up against," Elgar said.

India have maintained a low profile in their bio-secure bubble in Johannesburg since their arrival, but batsman Cheteshwar Pujara feels this is their greatest opportunity ever to win a Test series in South Africa.

ALSO READ: Seamers are our strength, they give India hope of first series win in South Africa, says Cheteshwar Pujara

"Our fast bowlers have been the difference between the sides overall when we have played abroad. If you look at the Australia and England series, we have done exceptionally well as a bowling unit," Pujara stated on the website of the Board of Control for Cricket in India.

"Our fast bowlers are our strength (in South Africa) and I hope they can utilise the conditions and give us 20 wickets in each test match."

India just concluded a home series triumph over New Zealand, while South Africa has not played Test cricket since a series victory in the West Indies in June.