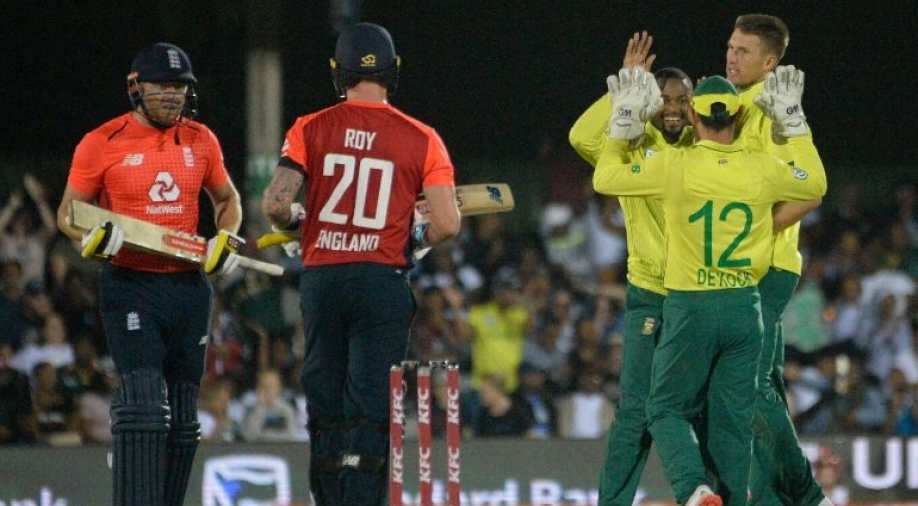 England were cruising towards victory after Jason Roy's explosive 70 from 38 balls and captain Eoin Morgan's 52 from 34 balls.

In a thrilling clash, the Proteas beat England by 1 run on Buffalo Park, South Africa and take a 1-0 lead in the three-match T20I series.

England won the toss and chose to bowl, South Africa's Temba Bavuma and skipper Quinton de Kock came down to bat. They gave the team a good start. The opening pair smashed 48 runs in the first four overs. South Africa scored 177 runs with the loss of 8 wickets in 20 overs.

England were cruising towards victory after Jason Roy's explosive 70 from 38 balls and captain Eoin Morgan's 52 from 34 balls.

It looked like England's game when they needed 7 runs off 7 balls with five wickets in hand and their in-form skipper on-strike. But English skipper's dismissal on the final ball for of the 19th over was a game-changing moment for England.

Lungi Ngidi concedes just five runs from the final over to secure victory by just a single run!#SAvENG pic.twitter.com/suOfXCpRZY

In the 20th over, England needed just 7 runs off 6 balls, Lungi Ngidi's over conceded 5 runs and had 3 wickets

The wind during the match determined the course of the game, as strong winds managed to stop balls (in the air) crossing the boundaries and restricting the ball to the fielders standing in deep.

“It was quite interesting towards the end there, but we knew if we stuck to our basics as a bowling unit we could end up winning,” South Africa captain Quinton de Kock said.

Lungi Ngidi was adjudged the Player of the Match, after scalping 3 crucial wickets in the game and the thrilling final over.

England has been dominating in this tour, they won the Test series against South Africa (3-1), and they drew the ODI series as one of the matches was abandoned due to rain.

'Covid had the courage to challenge me': Zlatan Ibrahimovic's humorous take on testing positive