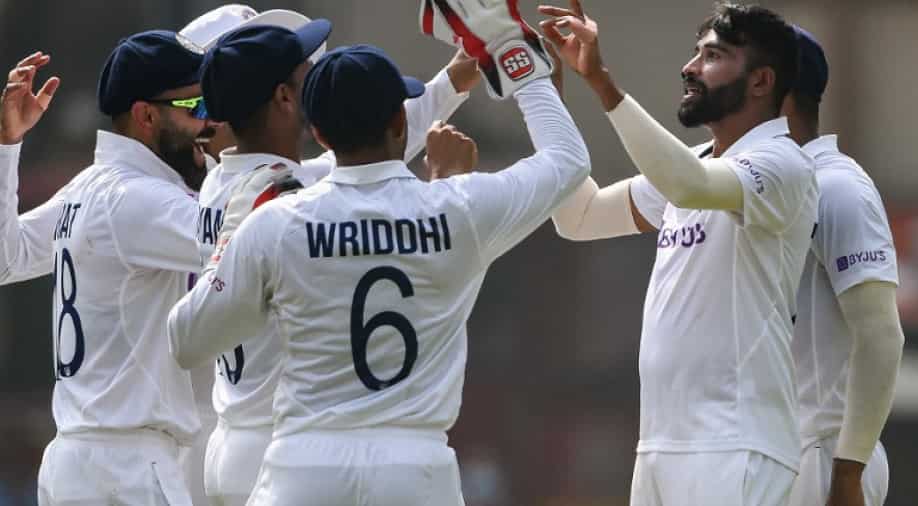 India will take on South Africa in the first Test starting from December 26. Photograph:( AFP )

India will lock horns with South Africa in the first Test of the upcoming three-match Test series at the SuperSport Park in Centurion on December 26. The Boxing Day game is all set to be a blockbuster encounter with India heading into the game on a confident note after beating New Zealand 1-0 in the recently-concluded two-match Test series at home.

Ahead of the start of the first Test, India have some major selection headaches with the likes of Hanuma Vihari and Shreyas Iyer competing for a spot in the middle-order, while Ajinkya Rahane's place in the playing XI remains in a doubt. Former India batter Wasim Jaffer has picked his predicted playing XI for India ahead of the first Test.

While Rahane's struggles have been well documented in the last few Test series, Iyer is in contention for a spot in the middle-order after his magnificent debut against New Zealand where he slammed a hundred and a fifty in the two innings of his first Test. Vihari, who scored three half-centuries for India A against South Africa A, is also a strong contender to make the cut.

However, Jaffer believed the team should go with Rahane in the first Test owing to his experience and the leadership qualities he brings in. Jaffer picked Iyer over Vihari considering his recent exploits in the debut series against New Zealand at home.

"KL and Mayank will open. Pujara at number three [and] Virat Kohli at four. I'll play Ajinkya at number five. There's a lot of debate regarding his form and between him Shreyas Iyer and Vihari. For the first Test, I'll definitely prefer Ajinkya because he has the experience, the skill.

"Yes, his recent form is debatable but he has scored runs in South Africa and knows the conditions well. And he brings a lot more to the table than just batting - [like leadership] when he was the captain [or] as a slip fielder," Jaffer told ESPNCricinfo.

Jaffer also picked India's bowling attack for the first Test against South Africa. He named three pacers - Jasprit Bumrah, Mohammed Shami and Mohammed Siraj in the attack while naming R Ashwin as the only spinner in the playing XI.

"I'll prefer Shreyas Iyer for number six because of his recent form and how he batted against New Zealand. I'll prefer him over Vihari. Vihari had a good series with India 'A', he made pretty good runs in similar conditions, but that was India 'A' series and not Tests. So I'll prefer somebody who scored runs in Tests. Number seven would be Rishabh Pant, number eight would be Ashwin and nine ten eleven would be Bumrah, Shami and Mohammed Siraj," he added.

India have never won a Test series in South Africa and have so far managed only three victories in Test matches in the country. However, this time around, Virat Kohli & Co. are a stronger unit compared to the hosts and have a great chance of scripting history by winning their maiden Test series against the Proteas in their own backyard.