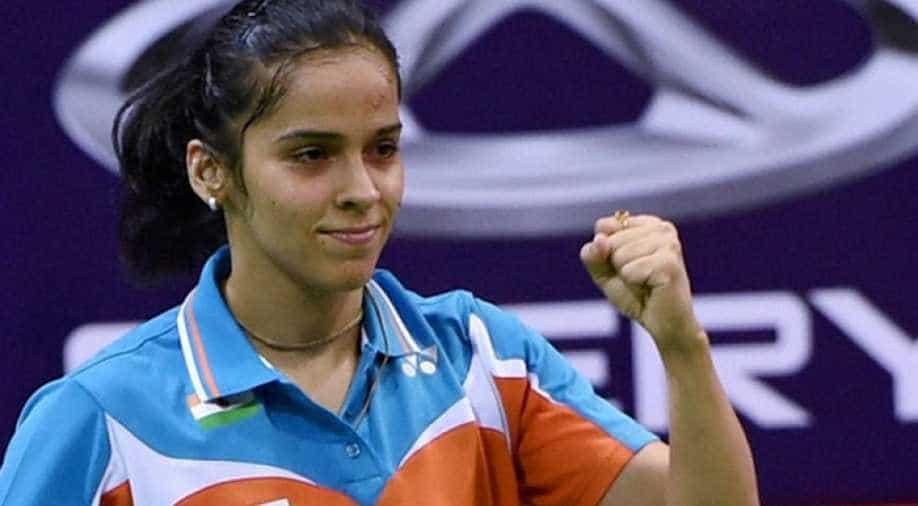 Saina Nehwal made a perfect start to the new season, reaching the women's singles final of the USD 350,000 Indonesia Masters with a thrilling straight-game win over world no 4 Ratchanok Inthanon of Thailand here today.

The former world no 1, who has won thrice in Indonesia, dished out a spirited performance to overcome a fighting Ratchanok 21-19 21-19 in the semifinal lasting 48 minutes.

Saina, who had a 8-5 head-to-head record against the 2013 World Champion Ratchanok, displayed tremendous fighting spirit as she erased a 6-10 deficit in the opening game and held on to the fort despite a late charge by the Thai shuttler in the second game.

Saina, who reached the final of an international competition after a year following her title triumph at Malaysia Masters last year, will play world no 1 Tai Tzu Ying of Chinese Taipei or Chinese eighth seed He Bingjiao in the final tomorrow.

In the opening game, Ratchanok opened up a 3-1 lead early on. Saina slowly tried to claw back and produced an excellent return from the back of the court which kissed the sideline to make it 5-5.
However, she erred in her serve and then committed a couple of errors to allow Ratchanok lead 8-5.

Saina won an exceptional rally next but Ratchanok produced a brilliant straight smash and a cross court drop to move to 10-7. A net dribble gone wrong gave another point to Saina but she went long next as Ratchanok entered the break with a three-point cushion.

Saina committed another service error but rode on her drop and body line returns to keep within touching distance at 11-13.

She soon drew parity after Ratchanok went wide and then grabbed a 14-13 lead when the Thai player went long.

Ratchanok again turned the tables but Saina clawed back immediately with another body smash after sending a series of returns on her rivals backhand in a rally that had 32 shots.

The Indonesian next won a video referral to move to 16- 15. Saina unleashed another down the line smash to again level scores but a half smash on Saina's backhand kept Ratchanok ahead.

Saina's return went long but she managed to stay at 18-18 after Ratchanok faltered at the net. The Indian sent a cross court return wide but Ratchanok also hit the net. The Thai player however went wide again to hand over one game point opportunity to Saina.

With another smash from Ratchanok going to the net meant Saina had grabbed the opening game.

In the second game, Saina came out with all cylinders blazing as she zoomed to a 6-1 lead. Ratchanok won a point with a cross court drop but Saina produced a towering smash and a precise return to make it 9-2.

Ratchanok then enjoyed a four-point burst to move to 6-10 but she hit the net next as eventually Saina entered the interval with a 11-8 lead after producing another down the line smash.
Saina continued to dominate the proceedings even as a tired-looking Ratchanok committed too many errors to allow the Indian to lead 17-11 at one stage.

Just when it looked all was over, Ratchanok changed gears and reeled off six points to draw parity at 17-17. The drift in the hall seemed to have changed and it bothered Saina?s on-court decisions as she left two shots at the backline and found the net twice.

However, Ratchanok again went out to allow Saina make it 18-17. A tight net play by Saina and a judgement error by Thai at the back court handed the Indian two match points.
Ratchanok saved one but Saina won an exciting rally next after her opponent went wide again.