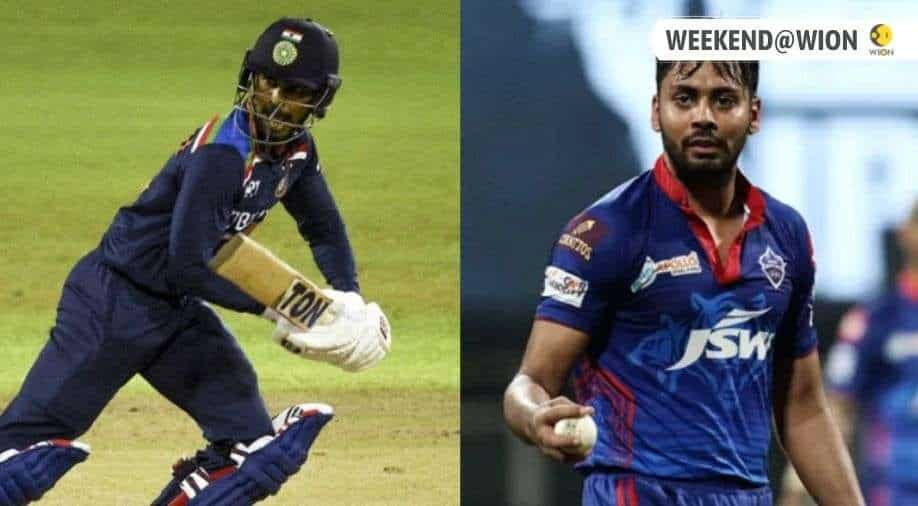 Ruturaj Gaikwad and Avesh Khan are among the Indian youngsters to watch out for in 2022. | Photo - AFP/IPL | Photograph:( Others )

A number of young Indian cricketers are waiting in the wings to take the world by storm with their performances in 2022. Here is a look at some of the most promising Indian youngsters to look forward to this year.

The year gone by was far from a fruitful one for the Indian team as the Men in Blue once again failed to bring an end to their long-standing ICC trophy drought. India lost the final of the inaugural edition of the World Test Championship against New Zealand before failing to qualify for the knockout stages of the T20 World Cup 2021.

While it was a disappointing year for the Indian cricket team in terms of results, 2021 saw the rise of a number of promising youngsters, who can become the future stars of Indian cricket. While Mohammed Siraj and Rishabh Pant cemented their spots in the Indian team with their heroics in Australia, Ishan Kishan realised his dream of making his India debut.

Ruturaj Gaikwad continued his purple patch in the Indian Premier League (IPL) 2021 and finished as the highest run-getter of the season, beating seasoned campaigners like KL Rahul, Shikhar Dhawan and Faf du Plessis to the Orange Cap before enjoying a sensational run in the Vijay Hazare Trophy where he went on to notch up 603 runs in just five games averaging over 150.

Venkatesh Iyer was also among one of the finds for Indian cricket in the year 2021 after his all-round heroics for Kolkata Knight Riders (KKR) in the Indian Premier League. There is plenty to look forward to in terms of talent in Indian cricket in 2022 as a number of these youngsters will be raring to make it count and make the world take notice of their performances this year.

Here is a look at some Indian youngsters to look forward to in 2022:

Ruturaj Gaikwad could easily be the next big thing in Indian cricket if nurtured in a proper manner and given adequate opportunities. In the last couple of years, Gaikwad has showcased his skills and talent against the best of bowlers in the Indian Premier League and has impressed one and all with his impeccable technique and tenacity.

Gaikwad is a technically gifted batter, who can make run-scoring look easy. He was the top scorer in IPL 2022 with 635 runs in 16 matches at an impressive average of 45.35 and a strike rate of over 136. He then finished as the highest run-getter in the Vijay Hazare Trophy where he notched up 603 runs in just five games to earn an ODI call-up in the Indian squad.

He is one of the promising batters to look forward to in the year 2022 as Gaikwad looks set to make it big in Indian cricket in the future.

Venkatesh Iyer enjoyed one of his best cricketing seasons in the year 2021 as he rose to prominence after his all-round heroics for the Kolkata Knight Riders (KKR) in the Indian Premier League (IPL). An explosive opener and a handy bowler, Iyer has risen through the ranks quickly and has already made his ODI and T20I debut for the Indian team. He had played an instrumental role in helping KKR reach the final of IPL 2021 with some brilliant performances with the bat.

Iyer, an attacking left-hander, notched up 370 runs in just ten matches striking close to 130 for KKR in the second phase of IPL 2021 in the UAE. He then continued his impressive run in the Vijay Hazare Trophy before being called up to the Indian ODI team. 2022 can be a crucial year for the batting all-rounder, who has got the skills and talent to become a future star of Indian cricket.

Avesh Khan has risen through humble beginnings to come a long way in his cricketing career as he continues to knock on the selectors' doors for what seems to be an inevitable India debut. Avesh had a brilliant IPL 2021 for Delhi Capitals as he finished as the second-highest wicket-taker of the season with 24 wickets in 16 matches helping Delhi reach the playoffs.

Avesh was also called up as one of the standby fast bowlers for the Indian team on their tour of England last year. The 25-year-old has pace, and the ability to bowl the right line and lengths consistently which makes him a great asset for his team. He can be one of the pacers to burst onto the scene for India in 2022 and make his dream international debut.

Ishan Kishan enjoyed a dream run in IPL 2022 and was one of the standout performers for Mumbai Indians in their title-winning campaign. He was deservingly handed his India debut last year and went on to impress as an opener. Ishan's explosive and swashbuckling style of batting can take the game away from the opposition in the matter of a few overs.

He has played only 5 T20Is and 2 ODIs for India so far but is currently part of the ODI squad in the ongoing series against South Africa and is expected to be in the fray going forward. Ishan can have a breakthrough year in 2022 if he is given consistent opportunities for Team India.

One of the most promising fast bowlers in the country at present, Prasidh Krishna has been a part of the Indian Premier League for a while now but hasn't quite been able to set the stage on fire with his performances. Nonetheless, he remains an exciting prospect for the Indian team and can be utilised across all three formats.

A tall and lanky fast bowler, who can clock good pacer consistently, Krishna made his India debut in an ODI against England at home last year and is currently a part of the squad in the ongoing ODI series against South Africa. He is expected to be eased into the other formats as well and might become a potent fast bowler for India in the future.

Also Read: Rahul Dravid has a big task ahead, has to prove he is not an overrated coach: Shoaib Akhtar

Ravi Bishnoi rose to prominence after his brilliant performances for the India U-19 team during the U-19 World Cup in 2020. He was roped in by Punjab Kings at the IPL player auction in the same year and hasn't looked back since. Bishnoi is currently one of the hottest young spin prospects in the country and has a bright future lying ahead of him.

In his debut IPL season, he picked up 12 wickets in 14 games for Punjab before taking 12 wickets once again in just nine games last season. He has 24 wickets so far in 23 IPL matches and has been picked by the Lucknow IPL team as one of their three drafts picks ahead of the IPL 2022 mega auction. Bishnoi can breakthrough into the Indian team this year if he can deliver consistently in the upcoming IPL season.