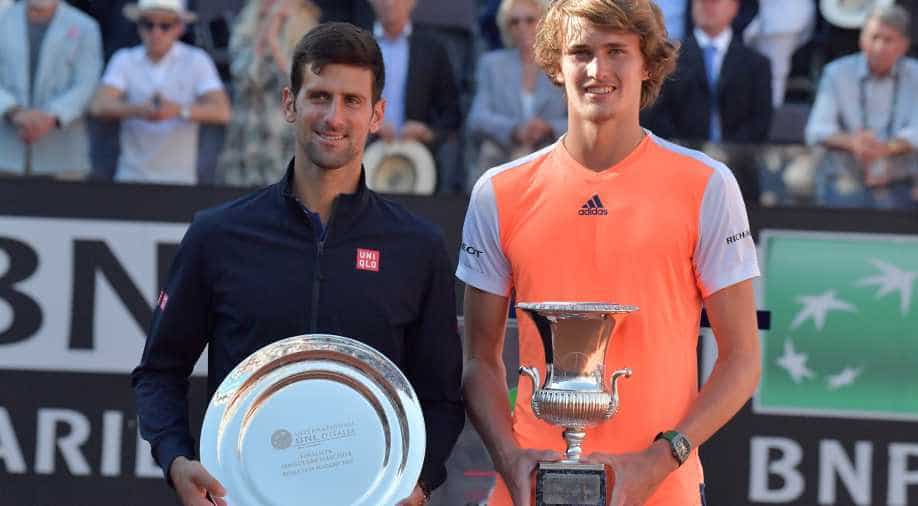 The 20-year-old Zverev claimed his maiden Masters 1000 title after becoming the youngest player in a decade to reach a final at this level and will move to 10 in the world as a result of his impressive victory.

Djokovic, who turns 30 on Monday, was the previous youngest Masters finalist, going all the way to the title in Miami as a 19-year-old in 2007.

But despite a clinical straight-set win over Austrian Dominic Thiem on Saturday, world number two Djokovic produced a flawed performance on centre court that saw him curse and swear as he struggled to find a way back into the match.

Overall, Djokovic had 27 unforced errors to 14 for Zverev, who also had 16 winners to the Serb's 11.

Zverev now has four career titles, three of which have come this year while Djokovic was denied what would have been a record 31st Masters title.

"Playing against Novak, one of the best players to ever play -- it was an honour being on the court with you," said Zverev, the first player born in the 1990s to win a Masters title.

"You're an amazing player. Unfortunately this week you didn't win, but I'm sure as we get closer to Paris you'll be one of the favourites for the title."

Zverev broke in the first game of the final on his way to the first set and carved out the crucial first break of the second set in the third game.

Djokovic's frustrations boiled over when he was handed a warning for an audible obscenity in the eighth game before he was broken again in the ninth as Zverev celebrated his first Masters title.

"I wish you go on to win many of these titles," Djokovic told the young German.

"Yesterday I played what I thought was one of the best matches of my life on clay. Today I played something else. But that's sport."

Despite the defeat, Djokovic will start the French Open, which gets underway next Sunday, as one of the leading favourites having completed the career Grand Slam in Paris in 2016.

Novak Djokovic confirmed American great Andre Agassi as his new coach Sunday, but said they did not yet have a "long-term commitment".

"I spoke to Andre the last couple weeks on the phone, and we decided to get together in Paris. So he's gonna be there. We'll see what future brings. We are both excited to work together and see where it takes us," said Djokovic.

"We don't have any long-term commitment. It's just us trying to get to know each other in Paris a little bit."