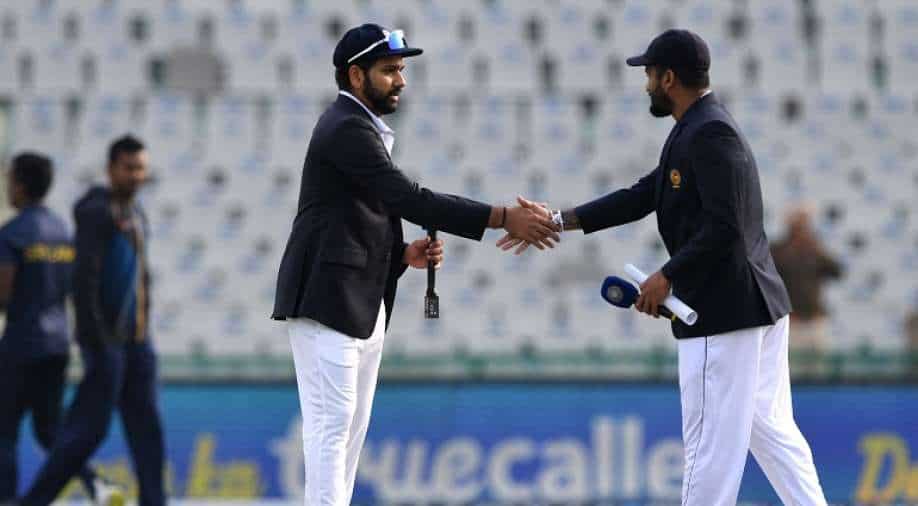 India have not lost a series at home in the longest format since their 2-1 defeat by England in 2012. Photograph:( AFP )

India will be strong favourites to stay unbeaten in pink-ball Tests at home as new captain Rohit Sharma eyes a clean sweep of Sri Lanka in the second Test starting Saturday.

Injury-hit Sri Lanka will need nothing less than a miracle to deny hosts India a 2-0 sweep in the test series when the two sides meet in the second and final test in Bengaluru, which will be played under the lights from Saturday.

India have not lost a series at home in the longest format since their 2-1 defeat by England in 2012 and won their 14th consecutive series at home when they beat inaugural World Test Champions New Zealand at the end of last year.

Led by new test captain Rohit Sharma, the side blanked Sri Lanka by an innings and 222 runs inside three days in the opening match against Mohali.

ALSO READ: Why not Ravindra Jadeja? Former India cricketer questions BCCI over not awarding A+ contract to all-rounder

Sharma's side will be firm favourites to extend their unbeaten streak, having never lost a test match to Sri Lanka at home and their last defeat against the southern neighbours coming way back in 2015 in the longest format.

To make matters worse for the touring side, Pathum Nissanka, who scored an unbeaten 61 in the first innings at Mohali, has been ruled out of the pink-ball test with a back injury.

Fast bowler Dushmantha Chameera, who missed the first match with an injury, was also unavailable, while fellow paceman Lahiru Kumara injured his hamstring on the opening day at Mohali.

"Injuries have been a huge concern for us," Sri Lanka captain Dimuth Karunaratne told reporters on Friday.

"We have few bowlers and to win a test we need 20 wickets. So it's very hard to win against a team like India."

The hosts, in contrast, have welcomed back fit-again Axar Patel for the Bengaluru test and the left-arm spinner is expected to replace Jayant Yadav in the side if India decide to continue with three tweakers.

It will be the third day-night test in India and the hosts have won both their previous pink-ball contests - against England and Bangladesh.

ALSO READ: His batting is phenomenal but how well he kept: Dinesh Karthik heaps praise on ever-improving Rishabh Pant

"We are still very new in this format," the hosts' fast bowling spearhead said, adding that India were yet to decide on their combination for the match.

"So it`s a mental adjustment."