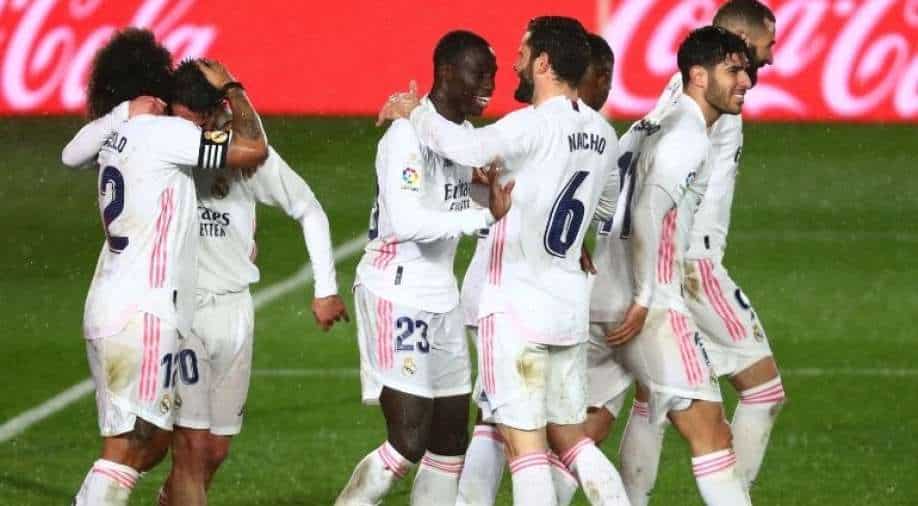 French left-back Ferland Mendy doubled their lead six minutes later, starting the move with a bursting run through midfield before sliding in to knock home a cross from Marcelo.

Real Madrid's French duo Karim Benzema and Ferland Mendy struck in the second half as the Spanish champions overcame an injury crisis to beat Getafe 2-0 at home on Tuesday and close the gap to La Liga leaders Atletico Madrid to five points.

Benzema leapt to connect with a curling cross from Vinicius Jr. and head Real in front on the hour mark, giving the hosts a deserved lead after dominating the first half against an unambitious Getafe side who had only one shot on goal all game.

French left-back Ferland Mendy doubled their lead six minutes later, starting the move with a bursting run through midfield before sliding in to knock home a cross from Marcelo.

The victory took Zinedine Zidane's side into second in the standings and left them five points below Atletico, who drew 2-2 with Celta Vigo on Monday to end an eight-game winning streak but have two games in hand.

"This win gives us a lot of confidence, I think we are on our way back to our best," said Benzema.

"Getafe always makes things difficult for you but we put in a big performance. We're just focusing on ourselves, we're not looking at the league table but we're going to try to win every game because there's still a long way to go in the season."

Real were missing nine first-team players through injury or suspension, which led Zidane to field an unorthodox 3-4-3 formation which was particularly effective down the left-hand side due to the twin threat of left-backs Mendy and Marcelo.

He also gave 20-year-old midfielder Marvin Park his first start for the club, although the youngster only lasted 55 minutes before being taken off for 19-year-old Sergio Arribas.