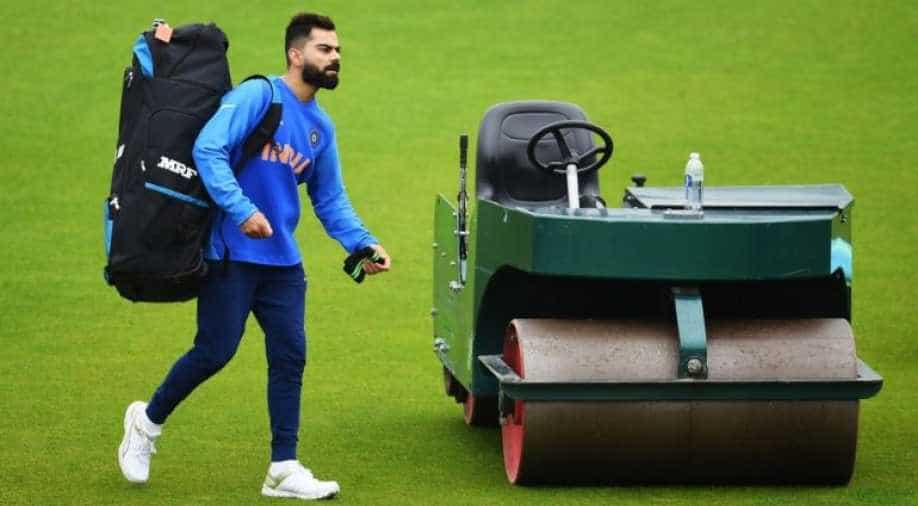 Virat Kohli at practice session ahead of clash against New Zealand. Photograph:( AFP )

Virat Kohli-led India will take on New Zealand in the 18th match of Cricket World Cup 2019 but the weather forecast at the venue is not looking good as there are slim chances of getting a full a game today in Nottingham.

The Met Office in England had issued a 'yellow warning' for heavy rain at Trent Bridge in Nottingham for today and the maximum temperature will be around 13 degrees through the day, making it extremely cold for both the teams on the field.

"The unsettled weather continues this week with further heavy rain and thunderstorms expected to impact some parts of the UK," published The Met Office on their website.

A record three matches have already been either abandoned or called off in the weather-hit tournament and the forecast is for further washouts this week.

The absence of reserve days is being brought up by the players and the coaches, but the International Cricket Council (ICC) on Tuesday defended not scheduling reserve days for group matches at the rain-marred World Cup and blamed the disruptions on "extremely unseasonable weather".

The organisers have been criticised for not allotting reserve days in the group stage and outgoing ICC chief executive David Richardson said it was not a feasible idea.

"Factoring in a reserve day for every match ... would significantly increase the length of the tournament and practically would be extremely complex to deliver," he said in a statement.

If the game is washed-out both India and New Zealand will get one point each.

New Zealand are at the top of the points table with six points from three games and India have four points from two games with two victories.

(All timings in GMT)