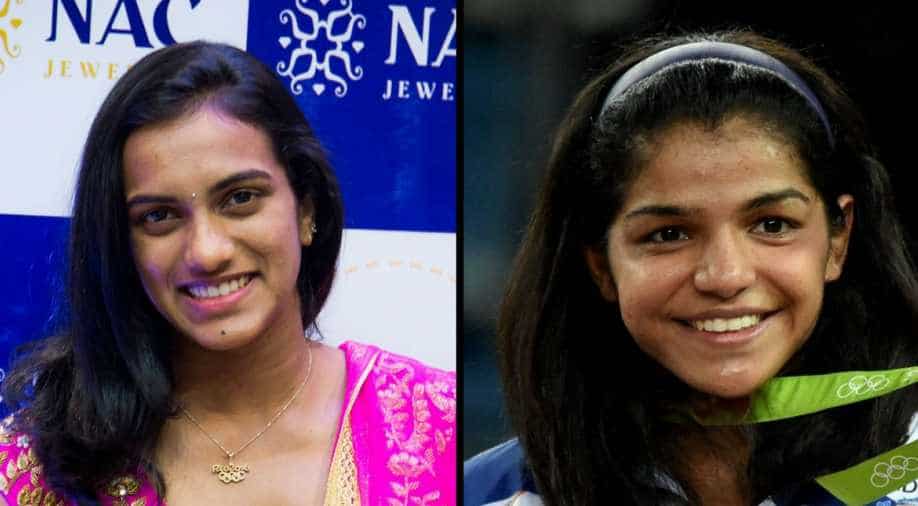 A file photo of PV Sindhu and Sakshi Malik. Photograph:( Others )

India's women athletes will for the first time wear trousers and a blazer instead of a traditional sari at the Commonwealth Games opening ceremony in Australia, a move that has pitted reformers against traditionalists.

Many Indian women competitors have welcomed the dark blue blazer and trousers that the Indian Olympic Association said was introduced at the request of the country's athletes' commission.

But female stars like badminton ace PV Sindhu and wrestler Sakshi Malik, both Olympic medalists, prefer the time-honoured sari, a flowing dress draped over the body.

"We always feel happy and proud when we wear a sari during the opening ceremonies," Malik told the Mail Today newspaper.

Younger athletes feel it will be a change for the better at the opening parade for the 21st Commonwealth Games starting April 4 in Gold Coast, Australia.

Women's hockey captain Rani Rampal told AFP that she "loves" the new uniform at the official launch of the attire in New Delhi on Monday.

"It's very nice. Time to time there should be changes. Girls always used to wear a sari at the Games but this time it will be different and I love it," said the 23-year-old Rampal.

Fifteen-year-old shooter Manu Bhakar was relieved not to have to wear a sari, which she finds difficult to wrap.

"I have never worn these typical women dresses, so it was a bit weird when thinking that I would have to wear the sari.

Bhakar told AFP that she always wears trousers and shirts so the new uniform will be "comfortable" for her.

Indian gymnast Pranita Das wore a sari at the 2014 Commonwealth Games but said she thought the trousers would be a better fit for female athletes.

Male athletes have mostly worn blue blazers with grey trousers at major sporting events while women have had to wear the traditional Indian attire.

This time will be more unisex, though the men will have to wear a tie while the women will wear a scarf.

The Raymond company that designed the outfits for the Indian contingent in Australia also said women's modern dress is more practical.

"Traditional Indian costume is definitely a sari but women athletes have themselves said that wrapping a saree is a tedious thing to do," a Raymond spokesman Rohit Khanna told AFP.

"So based on their feedback we created this ensemble for the women athletes which is a white shirt, blazer and trouser with a scarf."